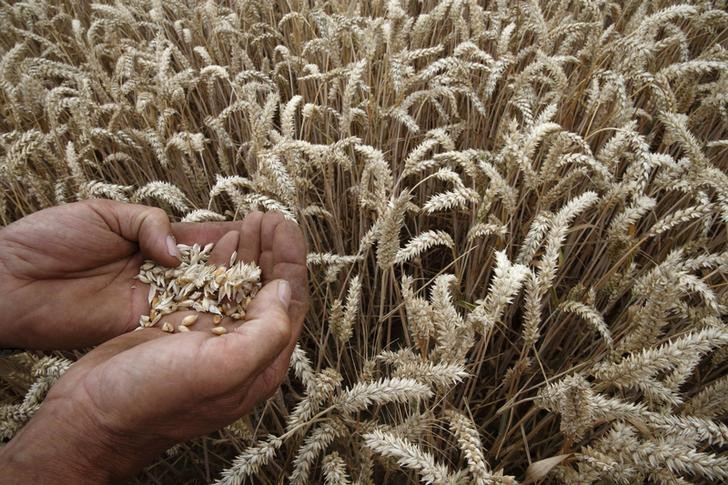 © Reuters. FILE PHOTO: A farmer plows a field with a tractor amid concerns related to coronavirus disease (COVID-19) near the town of Bellevue in Blaine County, Idaho, U.S. April 13, 2020. REUTERS/Jim Urquhart By Julie Ingwersen CHICAGO (Reuters) – An unprecedented heat wave and ongoing drought in the U.S. Pacific Northwest is damaging white

© Reuters. FILE PHOTO: A farmer plows a field with a tractor amid concerns related to coronavirus disease (COVID-19) near the town of Bellevue in Blaine County, Idaho, U.S. April 13, 2020. REUTERS/Jim Urquhart

CHICAGO (Reuters) – An unprecedented heat wave and ongoing drought in the U.S. Pacific Northwest is damaging white wheat coveted by Asian buyers and forcing fruit farm workers to harvest in the middle of the night to salvage crops and avoid deadly heat.

The extreme weather is another blow to farmers who have struggled with labor shortages and higher transportation costs during the pandemic and may further fuel global food inflation.

Cordell Kress, who farms in southeastern Idaho, expects his winter white wheat to produce about half as many bushels per acre as it does in a normal year when he begins to harvest next week, and he has already destroyed some of his withered canola and safflower oilseed crops.

The Pacific Northwest is the only part of the United States that grows soft white wheat used to make sponge cakes and noodles, and farmers were hoping to capitalize on high grain prices. Other countries including Australia and Canada grow white wheat, but the U.S. variety is especially prized by Asian buyers.

“The general mood among farmers in my area is as dire as I’ve ever seen it,” Kress said. “Something about a drought like this just wears on you. You see your blood, sweat and tears just slowly wither away and die.”

U.S. exports of white wheat in the marketing year that ended May 31 reached a 40-year high of 265 million bushels, driven by unprecedented demand from China.

But farmers may not have as much to sell this year.

“The Washington wheat crop is in pretty rough shape right now,” said Clark Neely, a Washington State University agronomist. The U.S. Agriculture Department this week rated 68% of the state’s spring wheat and 36% of its winter wheat in poor or very poor condition. A year ago, just 2% of the state’s winter wheat and 6% of its spring wheat were rated poor to very poor. [US/WHE]

On top of the expected yield losses, grain buyers worry about quality. Flour millers turn to Pacific Northwest soft white wheat for its low protein content, which is well-suited for pastries and crackers.

But the drought is shriveling wheat kernels and raising protein levels, making the some of the crop less valuable. “The protein is so high that you can’t use (it) for anything but cattle feed,” Kress said.

Low-protein “soft” wheats have lower gluten content than the “hard” wheats used for bread, producing a less-stretchy dough for delicate cakes and crackers.

The Washington State Agriculture Department said it was still too early to estimate lost revenue from crop damage.

The heat peaked in late June, in the thick of the harvest of cherries. Temperatures reached 118 degrees Fahrenheit (48 Celsius) on June 28 at The Dalles, Oregon, along the Washington border, near the heart of cherry country.

Scientists have said the suffocating heat that killed hundreds of people would have been “virtually impossible” without climate change and such events could become more common.

On the hottest days last month, laborers who normally start picking cherries at 4 a.m. began at 1 a.m., armed with headlamps and roving spotlights to beat the daytime heat that threatened their safety and made the fruit too soft to harvest.

“We think we probably lost about 20% of the crop,” Thurlby said, adding that growers simply had to abandon a portion of the heat-damaged cherries in their orchards.

The heat wave’s impact on Washington’s $2 billion apple crop – the state’s most valuable agricultural product – is uncertain, as harvest is at least six weeks away. Apple (NASDAQ:) growers are used to sleepless nights as they respond to springtime frosts, but have little experience with sustained heat in June.

“We really don’t know what the effects are. We just have to ride it out,” said Todd Fryhover, president of the Washington Apple Commission.

Growers have been protecting their orchards with expansive nets that protect fruit against sunburn, and by spraying water vapor above the trees. Apples have stopped growing for the time being, Fryhover said, but it is possible the crop may make up for lost time if weather conditions normalize.

The state wine board in Oregon, known for its Pinot Noir, said the timing of the heat spike may have benefited grapes. Last year, late-summer wildfires and wind storms forced some West Coast vineyards to leave damaged grapes unharvested.