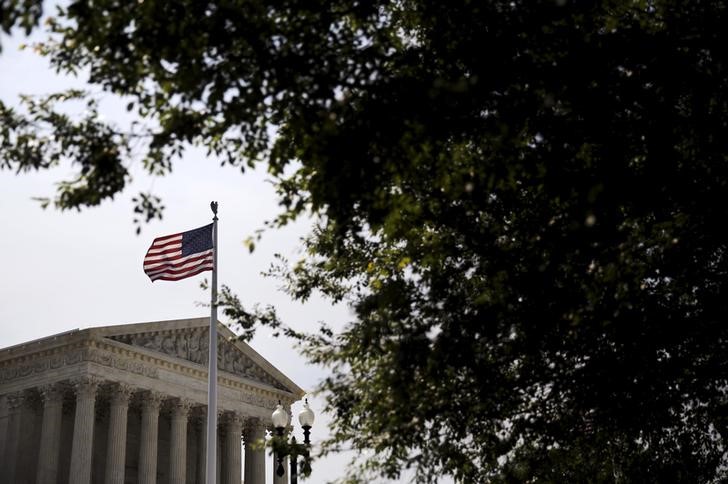 By Lawrence Hurley and Andrew Chung

WASHINGTON (Reuters) -A White House commission studying potential changes to the U.S. Supreme Court said expanding the number of justices would pose “considerable” risks and might further politicize the court, according to preliminary draft documents released on Thursday.

Members of the commission formed by President Joe Biden appeared more positive about the benefits of imposing term limits and staggering appointments out over time. But they noted it might not be possible to make such a change without amending the U.S. Constitution.

The documents are to be used as a source of debate by members of the commission who are holding a meeting on Friday and will prepare a report for Biden and turn it over to him by mid-November.

Biden signed an executive order in April creating the 36-member bipartisan commission in response to calls from the left for seats to be added in order to counteract the 6-3 conservative majority on the nation’s highest court.

Many Democrats were angered by Republican former President Donald Trump’s success in filling three vacancies, including one that Republicans who controlled the Senate refused to fill when Democrat Barack Obama was president.

The commission noted that adding seats would clearly be lawful but said that “the risks of court expansion are considerable, including that it could undermine the very goal of some of its proponents of restoring the court’s legitimacy.”

It said that “rather than calm the controversy surrounding the Supreme Court, expansion could further degrade the confirmation process,” adding that “a future Senate could respond by refusing to confirm any nominee.”

While the discussion materials noted that commissioners were divided on the merits and justification of expanding the court, they said that advocacy groups, a cross-ideological group of Supreme Court lawyers, academics and others preferred the idea of term limits for the justices, who currently have lifetime appointments.

“Among the proposals for reforming the Supreme Court, term limits for Supreme Court Justices appear to enjoy the most widespread and bipartisan support,” one document said.

Term limits “would advance our constitution’s commitments to checks and balances and popular sovereignty” by allowing each president to appoint two justices per four-year term. That “can enhance the court’s legitimacy in the eyes of the public” because appointments will “appear fairer, less arbitrary and more predictable,” the draft materials said.

But the question remains how term limits can be implemented as that might require an amendment to the Constitution. “Members of the commission are divided about whether Congress has the power under the Constitution to create the equivalent of term limits by statute,” one document said.

It is significantly more difficult to amend the Constitution than it is for Congress to enact legislation.

The materials noted that the United States is “the only major constitutional democracy in the world that has neither a retirement age nor a fixed term of years for its high court justices.”