Wall Street Has Surrendered to the $500 Billion ETF Rush 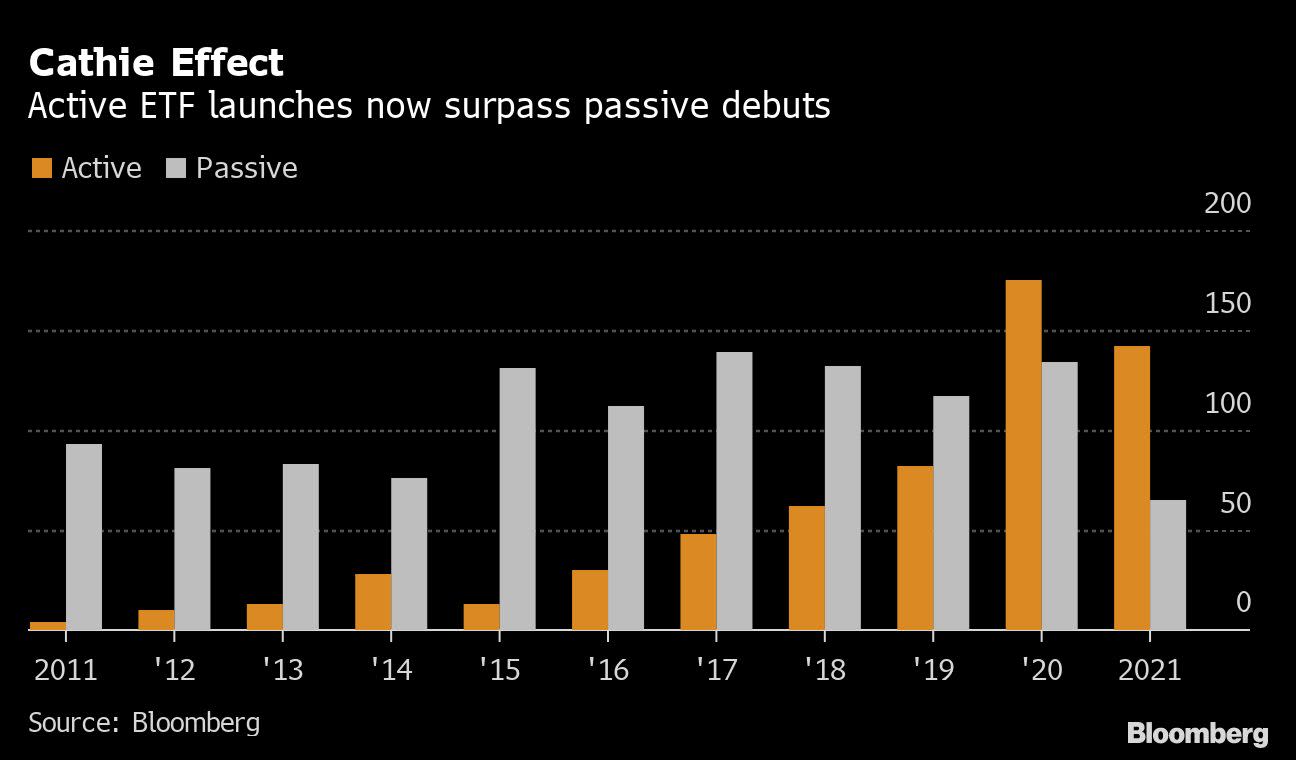 (Bloomberg) — U.S. money managers couldn’t stop the march toward exchange-traded funds, so they decided to join it instead. Now it’s more like a stampede. ETFs are on the brink of luring more money in seven months than in any calendar year on record. At $488.5 billion and counting, they’ll likely break the $497 billion


(Bloomberg) — U.S. money managers couldn’t stop the march toward exchange-traded funds, so they decided to join it instead. Now it’s more like a stampede.

ETFs are on the brink of luring more money in seven months than in any calendar year on record. At $488.5 billion and counting, they’ll likely break the $497 billion full-year record set in 2020 in weeks, possibly days.

Within that surge is a historic capitulation by the mutual fund industry.

Investors have long been migrating to the cheaper, easier-to-trade and more tax-efficient vehicle. Now even the most-storied money managers are launching ETFs in a bid to stay relevant, and some — like Vanguard Group — are handling their clients’ conversions for them.

Almost all of the 25 largest asset managers in the U.S. offer an ETF or plan to do so, according to Bloomberg Intelligence. Capital Group is the biggest without one — and it intends to join the club before long.

“There’s a format change,” said Eric Balchunas, ETF analyst for BI. “In the same way that people went from buying CDs to using streaming or digital music, or from using cabs to Uber.”

ETFs are vehicles that pool investor cash, just like mutual funds. The difference is they trade all day like stocks, and a quirk in the way they operate — swapping assets with an intermediary — helps them to defer tax liabilities.

First created more than 30 years ago, their popularity has surged since the 2008 financial crisis. In the brutal economic fallout, mistrust of money managers grew and investors gravitated to largely passive and transparent ETFs, doubling assets in U.S. funds to $1 trillion by 2010.

History is now repeating, and the Covid crash last year has triggered another dash into ETFs.

Fund assets in the U.S. have jumped to a record $6.6 trillion, up from $3.7 trillion at the height of last year’s selloff. ETFs added $497 billion in new cash in 2020, while mutual funds suffered net withdrawals of $506 billion.

“The stress period we lived through in the first quarter of 2020 further validated not just the ETF structure but the ETF ecosystem in its entirety,” said Ben Johnson, Morningstar’s global director of ETF research. “It gave more investors greater confidence than ever that this is a suitable way to package and deliver not just different market exposures, but different investment strategies.”

This year as in 2020, Vanguard is dominating the leaderboard for ETF flows.

Much of Vanguard’s performance is down to rock-bottom pricing and ubiquity across trading platforms, but it also reflects an internal migration. Assets have been slowly shifting from Vanguard’s mutual funds to its cheaper ETFs. Of its $173.3 billion in U.S. ETF flows through June, about $10 billion was from conversions, a spokesperson said.

This process is easier for Vanguard than for many money managers because the firm’s unusual structure means its ETFs are a share class of its mutual funds. But others on Wall Street are finding a way.

March saw the first official conversion of a U.S. mutual fund to an ETF. The initial switch was made by a tiny firm, but the process has been rapidly scaled up by pioneering quant giant Dimensional Fund Advisors.

The Austin, Texas-based firm with $637 billion under management has already shifted about $29 billion of assets into ETFs, with more planned. The conversions followed its successful launch of three ETFs late last year, which themselves gathered $1 billion in assets in just a few months.

“It will be paramount that every existing asset manager have a viable ETF strategy moving forward,” said Nate Geraci, president of the ETF Store, an advisory firm. “The asset managers just now joining the ETF party are late, but they can still get in the door. The longer this goes on, the more difficult it is.”

Dimensional is one of numerous Wall Street holdouts including Wells Fargo and T. Rowe Price to finally embrace ETFs after a rule change in 2019 made launches easier and paved the way for structures that hide strategies. That trend has continued in 2021 — famed tech investor Ryan Jacob’s firm Jacob Asset Management became the latest to join the fray on Wednesday.

There may be a natural limit to the flood of cash from mutual funds. The entire U.S. retirement system is built around them, meaning for many portfolios it would be impossible to shift.

At the same time, mutual funds are also sitting on net inflows this year. Equity products have bled $206 billion, but those focused on fixed income — where active money management remains dominant — have added $302 billion, helping create a net $89 billion gain overall. The industry’s exact assets depend on how you define the market, but it still controls in the region of $20 trillion.

Meanwhile, ETFs may yet face constraints. A trio of money managers — BlackRock, Vanguard and State Street Corp. — account for roughly 80% of the market, and thanks to the boom, they now control vast chunks of Corporate America.

This “Big Three” collectively own about 22% of the typical S&P 500 company, according to Bloomberg data, up from 13.5% in 2008. That’s drawing the attention of regulators and raising concerns about what such dominance means for everything from corporate governance to how markets function.

Bigger, more established ETFs tend to attract the lion’s share of flows, so it’s a problem that’s only growing as cash pours in. Equity ETFs have already shattered their annual flow record, luring $372 billion compared with the best-ever $333 billion in 2017.

It’s a feat made possible by the historic stock rally: America’s benchmark gauge, the S&P 500, has repeatedly set all-time highs this year.

“The stock market has been on an incredible journey over the past year,” said Fiona Cincotta, senior financial markets analyst at City Index. “That sense of wanting to get involved and that fear of missing out is a big driver for getting money invested in the market.”

Another big draw has been the star asset manager Cathie Wood. The eight ETFs at her firm, Ark Investment Management, have pulled in $15.3 billion this year amid a frenzy for thematic investments built around trends like robotics or electric vehicles.

Performance helped, too: Wood’s funds were among the best in the U.S. last year. Alongside her success in luring cash, it’s made her the poster child for active management in ETFs.

The number of active fund launches is accelerating dramatically, and with 142 debuts versus 65 for passive products this will be the first year they outnumber their index-linked rivals. Flows help explain the rush: at around 4% of the U.S. market, active ETFs are claiming about 10% of incoming cash.

There are no guarantees the annual ETF flow record will be broken, of course. The second-half of 2021 could sour, and all that new cash could run for the exits. But history suggests it’s unlikely.

ETFs have collectively lost money only two months in the past three years. Even then, outflows are often relatively mild. As the world economy ground to a halt because of the pandemic in March last year and global stock markets crumpled, $357 billion was pulled from U.S. mutual funds. For ETFs, it was more like $17 billion.

“ETFs are an easy button of sorts that you can hit to get exposure to any number of different segments of the market, which draws from a much broader investor base than mutual funds ever had,” said Morningstar’s Johnson.

(Updates with latest figures from overnight. An earlier version corrected a date error in the first chart.)