This Bear Market May Not Last Long 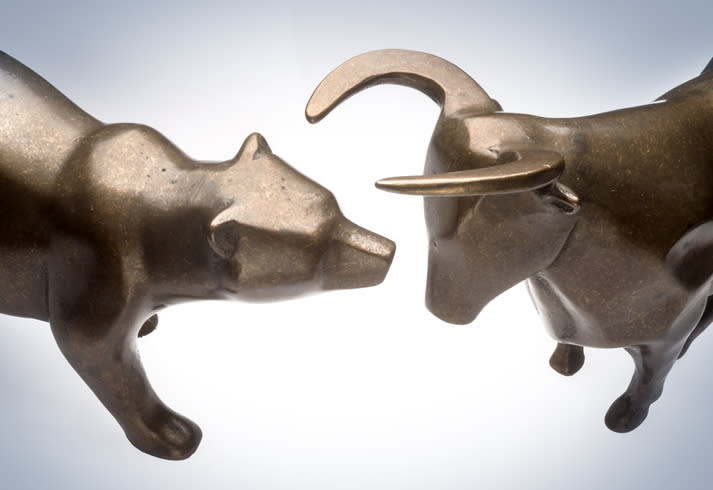 Cryptocurrencies are in a bear market. It’s not a call to be taken lightly. Analysts have already made bear-market calls prematurely on two occasions this year, numbly applying an off-the-shelf rubric (a 20% drop in a market benchmark).  In cryptocurrencies, bitcoin is the benchmark for the overall market. Bitcoin dominance, its share of the estimated


Cryptocurrencies are in a bear market.

It’s not a call to be taken lightly. Analysts have already made bear-market calls prematurely on two occasions this year, numbly applying an off-the-shelf rubric (a 20% drop in a market benchmark).

For bitcoin, 20% drops are quite common, on the way to new all-time highs. Earlier this quarter, we identified a simple method for determining whether such a drop (or rise) has ushered in a new market regime: a change of 20% in the CoinDesk Bitcoin Price Index (XBX), followed by at least 90 days in which bitcoin does not return to its previous high (or low).

Here’s why I don’t think this July will make it 26 times, but I do think this bear market will be short-lived.

Shares of the Grayscale Bitcoin Trust (GBTC), the largest bitcoin fund, have traded at a discount to net asset value since February. That’s unlikely to change, as a large raft of shares in the trust approach their lockup expiry this July. GBTC cannot be redeemed, but some investors who might have bought bitcoin in the spot market are likely to take advantage of the discount instead. (Disclosure: Grayscale is owned by Digital Currency Group, the parent company of CoinDesk, and GBTC is benchmarked to the CoinDesk Bitcoin Price Index (XBX).)

Beijing’s crackdown on bitcoin mining looks to be more than just government by press release. Miners are shutting down across China, resulting in a flood of unused mining equipment.

Bitcoin mining is not for the faint of heart or short of capital, but at some scale, it presents investors an opportunity to acquire bitcoin below spot market price. It’s unclear whether idled machines in China will be viable in North American operations or in other growing mining centers. If they are, hosting space may not be available. Nevertheless, some large investors who otherwise might buy and hold are no doubt eyeing increasingly attractive capital-expenditure projections in a mine-and-hold alternative.

Evidence points to a retail-driven run-up in April: volumes in altcoins, including meme currencies like dogecoin, eclipsed that of bitcoin on spot exchanges. Now, retail buying seems exhausted.

Meanwhile, barometers of institutional participation, such as volumes on LMAX Digital and open interest in CME bitcoin futures, are not showing signs of institutional buyers rushing to buy the dip and take retail buyers’ place.

These tea leaves can be misleading, but the quick takeaway is that nobody is in the driver’s seat right now. Network data bears this out, with active addresses down on both Bitcoin and Ethereum networks.

A market interregnum may indicate a short-lived bear regime, between bull markets. Some network data supports this analysis.

Bitcoin doesn’t have true “fundamentals,” in the sense that a bitcoin doesn’t represent a claim on cash flows. However, bitcoin and other cryptocurrencies have a family of metrics that indicate activity over networks. I wouldn’t be so naive as to apply Metcalfe’s Law (which predicts effect, not value) to the bitcoin price, but network data does provide another layer of insight, especially when combined with market data.

The chart above, from Glassnode earlier this week, shows that a growing share of the bitcoin that has moved during recent sell-offs has been “young coins,” i.e., coins that last moved within the past six months. Short-term investors are selling, while longer-term hodlers stand pat. As Coin Metrics’ Lucas Nuzzi noted last week, hodlers’ unrealized gains haven’t hit levels that preceded bitcoin’s past major crashes.

A good time for a vacation

Conclusion: If, like me, you’re planning on taking a vacation in July, your timing is good.