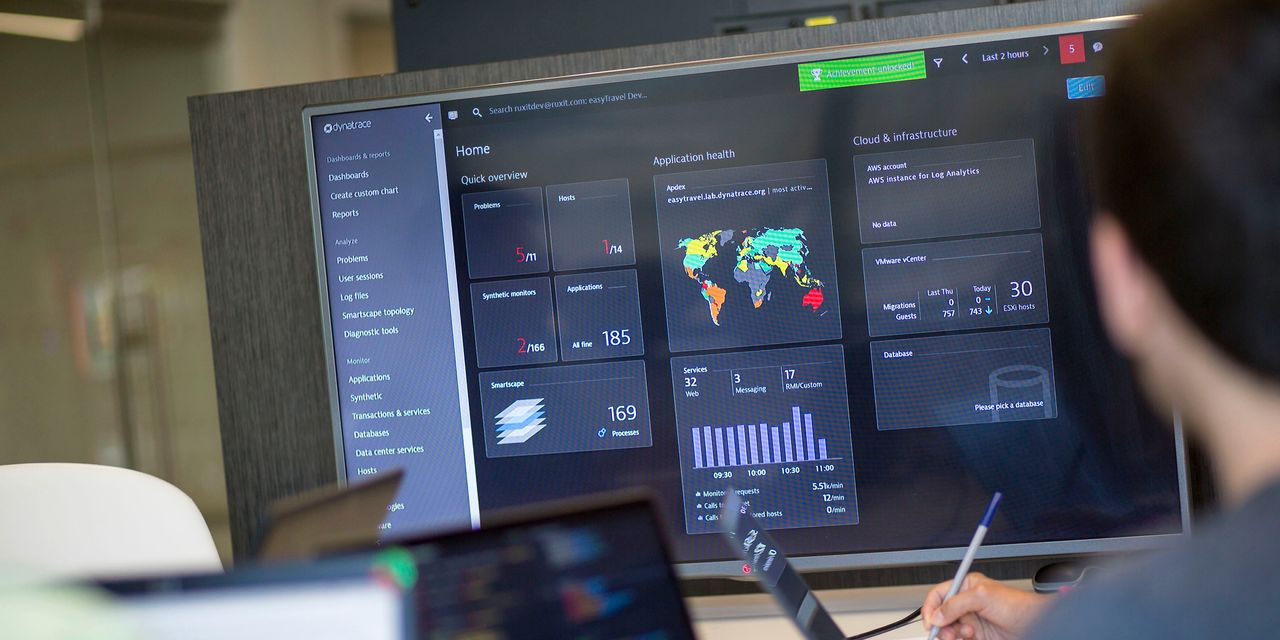 Dynatrace’s technology, above, helps IT departments monitor their networks’ health. Courtesy of Dynatrace Text size One of the challenges of modern enterprise computing is keeping track of what’s going on inside your network. Cutting-edge information-technology systems are a messy brew of public clouds, private clouds, old-school data centers, third-party apps, edge computing, and mobile workers.


One of the challenges of modern enterprise computing is keeping track of what’s going on inside your network. Cutting-edge information-technology systems are a messy brew of public clouds, private clouds, old-school data centers, third-party apps, edge computing, and mobile workers. Keeping tabs on what’s working—and what isn’t—is a gigantic challenge. The good news for investors is that the result is an enormous emerging market.

Once blandly known as infrastructure management tools, the market for this stuff now has a sexier, slightly Orwellian name: “observability.” Companies like Datadog (ticker: DDOG),

(SPLK) provide observability tools to help IT departments monitor their networks’ health. With enterprise tech spending poised to accelerate coming out of the pandemic, observability players should be big beneficiaries.

In a research note last week, Citi software analyst Tyler Radke laid out a bullish case for the group generally—and for Datadog, Dynatrace, and Elastic in particular. “We see a positive outlook for observability spending, with signs it could reaccelerate as IT spending recovers and as digitization projects pick up,” Radke writes.

While observability is a relatively new buzzword, the concept has been around for decades. “The term observability dates back over six decades to 1960 and has its roots in engineering and mathematical applications,” he explains. “Observability was defined as a ‘measure of how well internal states of a system can be inferred from knowledge of its external outputs.’ ”

In other words, observability tools seek clues to network health much as doctors diagnose illnesses by looking for symptoms that point to internal issues. Radke notes the market has three pillars: infrastructure monitoring (why is the network so slow?); application-performance management (what’s up with my apps?); and log management and telemetry (why are we getting errors and service tickets?). “Having visibility into these three components allows organizations to identify service issues, and isolate them, whether it is an infrastructure or application issue, and remediate,” he writes.

In an interview, Radke says he has been getting questions from the buy side about whether the market is big enough to support the heady growth rates of leading players. He’s convinced that the opportunity is substantial, at an estimated $55 billion in 2025, about triple the forecast from Gartner. He thinks some estimates rely too heavily on revenue from legacy on-premise tools providers, rather than anticipating the growing adoption of cloud-based applications.

A morning briefing on what you need to know in the day ahead, including exclusive commentary from Barron’s and MarketWatch writers.

Radke is particularly keen on Datadog, which provides both infrastructure management and application-performance monitoring tools, ranking it as one of his favorite overall enterprise software stocks. The stock isn’t cheap. Datadog shares trade for 28 times estimated 2022 sales, and profits are too small for the price/earnings ratio to be meaningful. But he sees “durable growth powered by continued robust new customer additions, and multiproduct strength,” and contends that the premium valuation reflects a combination of premium growth, improving profitability, and potential for upside to consensus estimates.

He also likes Dynatrace for its position in application monitoring for large enterprises, and he’s keen on Elastic’s combination of observability tools and search software. He’s less excited about Splunk, a company I’ve written about that has been hampered by an ongoing business-model transition that is crimping financial results. But all four will benefit if IT spending follows the script and picks up in the second half.

(AAPL) shares hit a record last week, pushing its market cap to an astounding $2.4 trillion. It was the stock’s first new high since January, reflecting growing anticipation of June-quarter financial results, now two weeks away, and the fall launch of iPhone 13.

In the March quarter, hardware sparkled—sales were up 66% for iPhones, 70% for Macs, and 79% for iPads—overshadowing 27% growth in services. That segment includes commissions generated from the App Store, where it sells programs for iPhones and other devices; revenue from streaming services like Apple Music and Apple TV+; and other services like

How much risk is there? Services were 16% of revenue in the latest six months. Apple said recently that the “app store ecosystem” generated $643 billion in revenue in 2020, about 90% outside the store itself (booking rides on Uber, say, or buying goods on Amazon). That implies $64 billion of activity via the store. If you use the 30% maximum commission, that’s some $20 billion in revenue, a little over a third of the $57 billion in calendar-2020 services revenue. That’s consistent with app tracker Sensor Tower, which estimates Apple’s 2020 take from the store at $21.7 billion. (For Google, it says it’s $11.6 billion.)

That means about 7% of Apple revenue is at risk if the App Store is regulated. But a reduced fee seems the likeliest scenario, so the true risk is probably smaller. Apple’s vulnerability is real, but modest. Investors seem unconcerned.