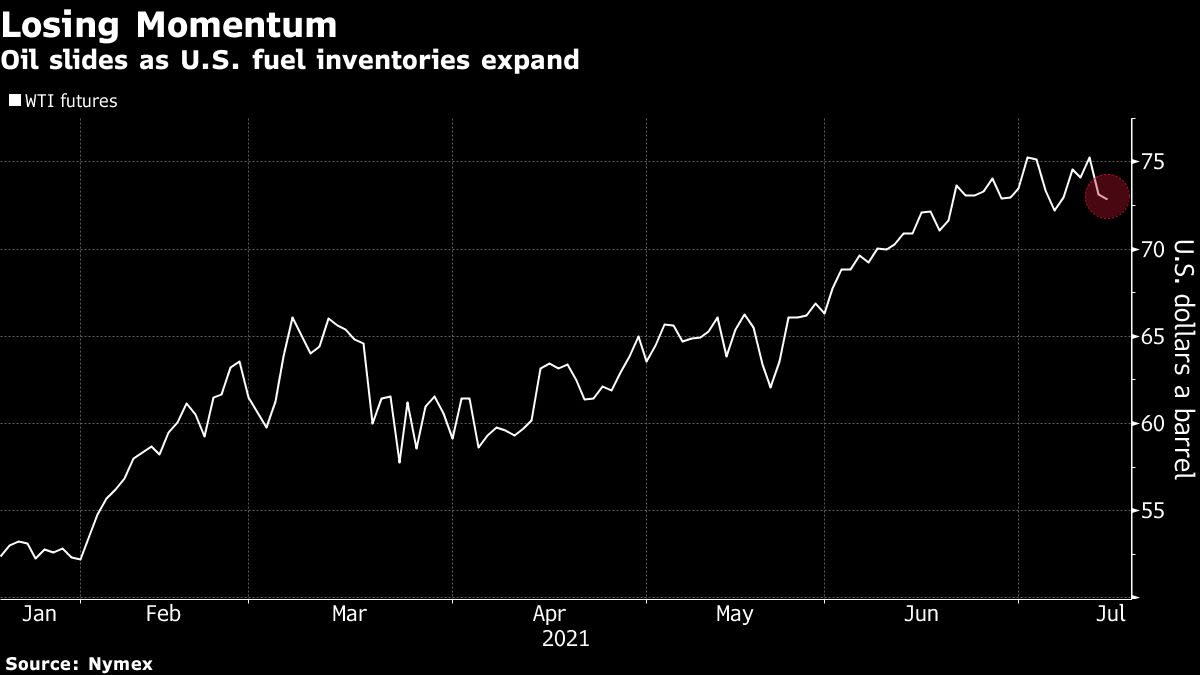 (Bloomberg) — Oil extended losses after U.S. gasoline stockpiles unexpectedly expanded, while signs the United Arab Emirates could get better terms under a compromised supply agreement raised concerns about OPEC+ unity. Futures in New York slid below $73 a barrel after falling 2.8% on Wednesday, the most since mid-May. American inventories of gasoline and distillates

Futures in New York slid below $73 a barrel after falling 2.8% on Wednesday, the most since mid-May. American inventories of gasoline and distillates — a category that includes diesel — both rose last week, offsetting an eighth weekly draw in crude stockpiles, according to government data.

The UAE is nearing a deal that could give the nation a more generous output limit next year and allow OPEC+ to lift supply in coming months, although talks with Saudi Arabia are ongoing, said delegates. However, the compromise may open the door for other members to redress their own grievances, with one delegate signaling Iraq would pursue a higher production baseline.

Oil has whipsawed since the start of the month after OPEC+ abandoned a plan to boost supply from August due to an impasse with the UAE, while a Covid-19 resurgence injected more uncertainty into the short-term demand outlook. The International Energy Agency on Tuesday warned that the market would tighten significantly if the alliance didn’t add more barrels.

The UAE’s energy ministry issued a statement acknowledging the talks, but said no agreement had yet been reached with the whole of OPEC+. While there are currently no firm details, Goldman Sachs Group Inc. said a deal would be a “bullish catalyst” and would help remove the low risk of a potential price war.

“The new uncertainty over OPEC+ ratification going through and potential for further complications if other members seek higher baselines keeps the suspense alive,” said Vandana Hari, founder of Vanda Insights in Singapore. “The OPEC+ stalemate and the shadow of the delta variant have made the market more prone to volatility, but Wednesday’s sell-off on the U.S. fuel stockbuilds may be recouped in the coming days.”

The UAE’s dispute with OPEC+ centers around its demand for a higher output limit next year, in return for backing an extension of the supply agreement from April 2022 until December 2022. The alliance was forced to abandon a tentative deal to boost production by 400,000 barrels a day in each month from August through December.