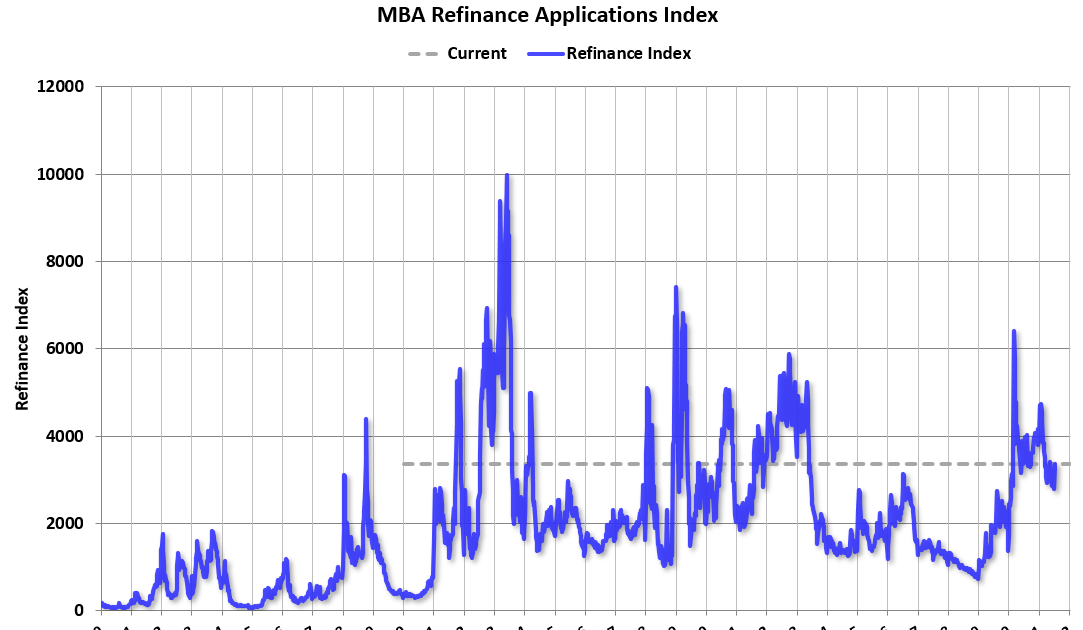 by Calculated Risk on 7/14/2021 07:00:00 AM From the MBA: Mortgage Applications Increase in Latest MBA Weekly Survey Mortgage applications increased 16.0 percent from one week earlier, according to data from the Mortgage Bankers Association’s (MBA) Weekly Mortgage Applications Survey for the week ending July 9, 2021. This week’s results include an adjustment for the

Mortgage applications increased 16.0 percent from one
week earlier, according to data from the Mortgage Bankers Association’s (MBA) Weekly Mortgage
Applications Survey for the week ending July 9, 2021. This week’s results include an adjustment for the
Fourth of July holiday.

“Overall applications climbed last week, driven heavily by increased refinancing as rates dipped again.
Treasury yields have trended lower over the past month as investors remained concerned about the
COVID-19 variant and slowing economic growth,” said Joel Kan, MBA’s Associate Vice President of
Economic and Industry Forecasting. “Mortgage rates fell for the second consecutive week as a result,
with the 30-year fixed rate hitting 3.09 percent, its lowest level since February 2021. Refinance
applications increased over 20 percent last week after adjusting for the July 4th holiday, aided by a 23
percent increase in conventional refinance applications. Also, there may have been a delayed spillover of
applications from the previous week, when rates also decreased but there was not much of response in
terms of refinance applications.”

Added Kan: “Purchase applications increased last week, but average loan sizes decreased to their lowest
level since January 2021. We continue to see ebbs and flows as housing demand remains strong but for-sale inventory remains low. However, lower rates may be helping some home buyers close on their
purchases, especially first-time home buyers. The year-over-year comparisons were down significantly for
both purchase and refinance applications, as they were relative to a non-holiday week in 2020.”
…
The average contract interest rate for 30-year fixed-rate mortgages with conforming loan balances ($548,250 or less) decreased to 3.09 percent from 3.15 percent, with points decreasing to 0.37 from 0.38 (including the origination fee) for 80 percent loan-to-value ratio (LTV) loans.
emphasis added

The first graph shows the refinance index since 1990. 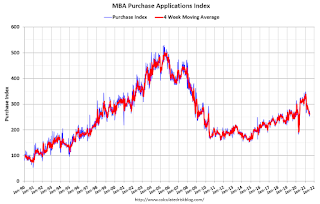 According to the MBA, purchase activity is down 29% year-over-year unadjusted.

Note: The year ago comparisons for the unadjusted purchase index are now difficult since purchase activity picked up in late May 2020.

Note: Red is a four-week average (blue is weekly).