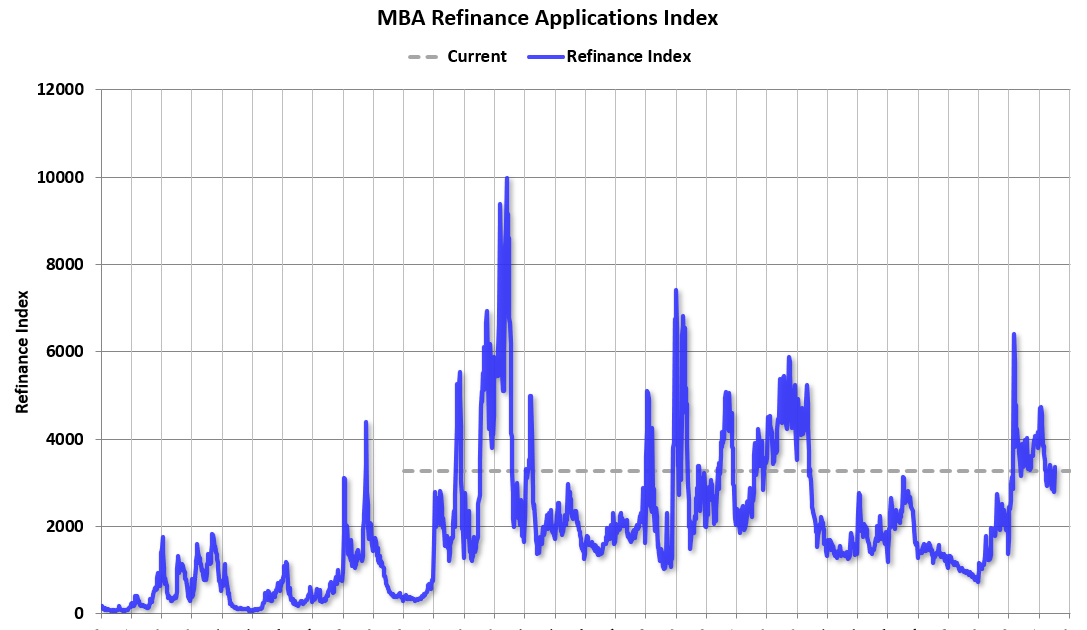 by Calculated Risk on 7/21/2021 07:00:00 AM From the MBA: Mortgage Applications Decrease in Latest MBA Weekly Survey Mortgage applications decreased 4.0 percent from one week earlier, according to data from the Mortgage Bankers Association’s (MBA) Weekly Mortgage Applications Survey for the week ending July 16, 2021. The previous week’s results included an adjustment for

Mortgage applications decreased 4.0 percent from one
week earlier, according to data from the Mortgage Bankers Association’s (MBA) Weekly Mortgage
Applications Survey for the week ending July 16, 2021. The previous week’s results included an
adjustment for the Fourth of July holiday.

“The 10-year Treasury yield dropped sharply last week, in part due to investors becoming more
concerned about the spread of COVID variants and their impact on global economic growth. There were
mixed changes in mortgage rates as a result, with the 30-year fixed rate increasing slightly to 3.11
percent after two weeks of declines. Other surveyed rates moved lower, with the 15-year fixed rate loan,
used by around 20 percent of refinance borrowers, decreasing to 2.46 percent – the lowest level since
January 2021,” said Joel Kan, MBA’s Associate Vice President of Economic and Industry Forecasting.

“On a seasonally adjusted basis compared to the July 4th holiday week, mortgage applications were lower
across the board, with purchase applications back to near their lowest levels since May 2020. Limited
inventory and higher prices are keeping some prospective homebuyers out of the market. Refinance
activity fell over the week, but because rates have stayed relatively low, the pace of applications was
close to its highest level since early May 2021.”
…
The average contract interest rate for 30-year fixed-rate mortgages with conforming loan balances
($548,250 or less) increased to 3.11 percent from 3.09 percent, with points increasing to 0.43 from 0.37
(including the origination fee) for 80 percent loan-to-value ratio (LTV) loans.
emphasis added

The first graph shows the refinance index since 1990.

With low rates, the index remains elevated, and will likely increase this coming week as rates declined. 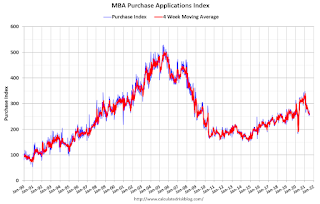 According to the MBA, purchase activity is down 18% year-over-year unadjusted.

Note: The year ago comparisons for the unadjusted purchase index are now difficult since purchase activity picked up in late May 2020.

Note: Red is a four-week average (blue is weekly).