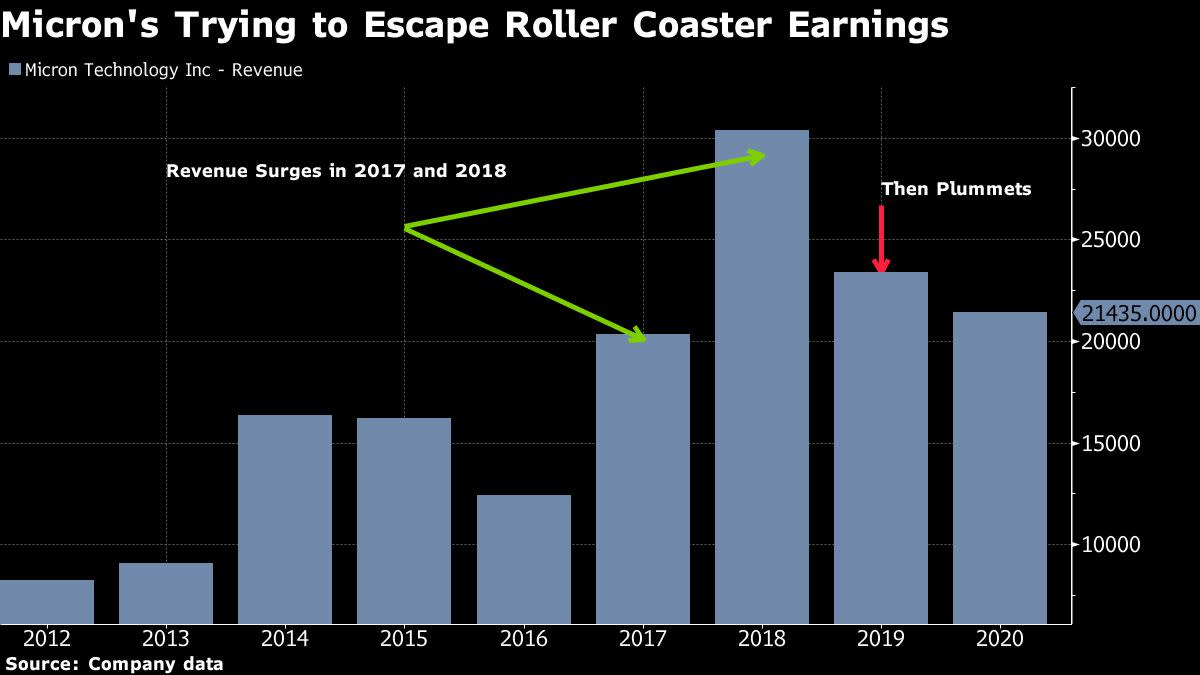 (Bloomberg) — Micron Technology Inc., the largest U.S. maker of memory chips, gave a revenue forecast for the current quarter that was in line with analysts’ projections, indicating solid demand for semiconductors that store data in computers and phones.Sales will be about $8.2 billion in the period ending in August, Micron said Wednesday in a


(Bloomberg) — Micron Technology Inc., the largest U.S. maker of memory chips, gave a revenue forecast for the current quarter that was in line with analysts’ projections, indicating solid demand for semiconductors that store data in computers and phones.Sales will be about $8.2 billion in the period ending in August, Micron said Wednesday in a statement. That compares with analysts’ average estimate of $7.85 billion, according to data compiled by Bloomberg. Profit, excluding certain items, will be about $2.30 a share, the Boise, Idaho-based company said. Analysts projected $2.17.

The chipmaker also said it’s selling its Lehi, Utah, plant to Texas Instruments Inc. The previously announced sale of the memory-chip manufacturing site, a former joint venture with Intel Corp., will bring in $900 million in cash and about $600 million in value from assets, including equipment that the company will redeploy to its other manufacturing sites or sell to other buyers, Micron said.

Under Chief Executive Officer Sanjay Mehrotra, Micron is trying to break with past cycles of boom and bust, in which surges in revenue have rapidly heralded slumps that often caused losses. Mehrotra has said his company will become more profitable and predictable in line with the rise of novel uses for memory chips and new products that are more than easily interchangeable commodities.

“Memory and storage is in a very different place that it used to be in the past,” Mehrotra said in an interview.

Demand was strong across all of the company’s markets, the CEO told analysts on a conference call after the results were released. There were some disruptions to supply caused by pandemic-related lockdowns in Malaysia and the inability of automotive, computer and industrial customers to get enough other types of chips, which meant they couldn’t produce all the end devices they had demand for, he said. That capped some orders for memory, Mehrotra said.

Prices are going up for Micron’s two main products, as is demand, but so are some of the costs as it takes action to mitigate the risks of future supply disruptions and shift manufacturing to more expensive products, the CEO said. Supplies of computer memory and storage chips will remain “tight” into 2022, he said.

In the fiscal fourth quarter, gross margin, or percentage of sales remaining after deducting the cost of production, will be 46%, plus or minus 1%, Micron said. Minus certain costs, that measure will be about 47%. Analysts had predicted a margin of 46%.

Mehrotra rejected concern expressed by analysts that the company’s margins aren’t expanding as quickly as they could, citing the huge leap in revenue and profit Micron is posting compared with previous peaks and troughs for the industry.

“Clearly we’re getting the value for our strong technology,” he said.

Micron’s shares have lagged behind an overall run-up on chip stocks this year. Some investors are concerned that a spike in orders for laptops needed for work and study at home during the pandemic will slow as people return to offices. There is also unease that smartphone makers in China have growing unused stockpiles of components. Micron’s leaders said they don’t see any slowdown in demand.

The stock fell about 1.7% in extended trading following the announcement. It had earlier closed up 2.5% at $84.98 in regular New York trading, leaving it up 13% this year compared with a 20% advance by the Philadelphia Stock Exchange Semiconductor Index.

Prices of dynamic random access memory, or DRAM, have risen amid shortages caused by limited investment in new production by Micron and its rivals over the last two years.

Separately, Micron said it is raising its spending on machinery in the form of orders for machines from ASML Holding NV. EUV, or extreme ultra violet, lithography technology is ready for use in memory chips and Micron has placed orders to get machines for future deployment.

(Updates with comments from CEO beginning in the fifth paragraph.)