Making the Case for Hydrogen—and for Plug Power 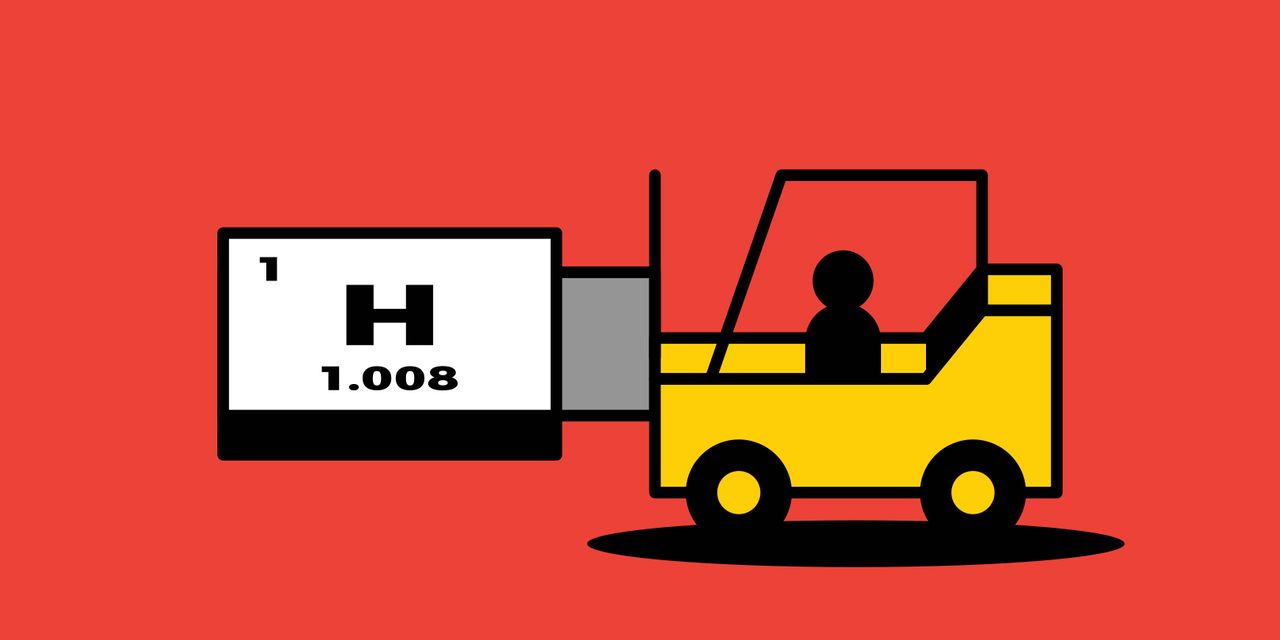 Illustration by Elias Stein Text size Hydrogen can help wean the world off carbon-based fossil fuels. And if it does, Plug Power is one of the best plays on that shift. That’s the case RBC analyst Joseph Spak made this past week, launching coverage of Plug Power with a Buy rating. The stock finished the


Hydrogen can help wean the world off carbon-based fossil fuels. And if it does,

is one of the best plays on that shift. That’s the case RBC analyst Joseph Spak made this past week, launching coverage of Plug Power with a Buy rating. The stock finished the week at $32.46, up 1.92%.

Plug Power makes fuel cells that run on hydrogen, which generate electricity, but don’t produce carbon dioxide, a main culprit in climate change. Plug’s core market is forklifts, but it aims to expand into fuel-cell powered heavy-duty trucks and electrolysis, which produces hydrogen (and oxygen) by passing electricity through water. If energy for electrolysis comes from a renewable source, carbon dioxide isn’t generated. “Hydrogen is increasingly viewed as a key pillar of decarbonization strategies worldwide,” wrote Spak. “With a lot of investment and government support, we believe a multidecade hydrogen transition can occur.”

That’s good news for Plug Power—though the stock (ticker: PLUG) reflects lots of good news already. The shares trade for about 18 times Spak’s estimate of annual sales. And while it is up only 1% in 2021, it zoomed 973% last year. “The market has looked to Plug as a proxy for hydrogen economy growth,” he says. “But the growth is significant, which helps justify the valuation.”

Spak’s $42 target is based on projecting cash flows into the future, as well as a 35 times multiple on the $537 million in cash flow he estimates for 2025. Despite the lofty valuation, Plug is popular on Wall Street. With Spak’s Buy call, two-thirds of analysts covering the stock now rate it a Buy. At about $45 a share, the average price target is higher than Spak’s, though both figures imply healthy upside.

Stock and bondmarkets are closed in observance of Independence Day.

The Institute for Supply Management releases its Services Purchasing Managers’ Index for June. Consensus estimate is for a 63 reading, slightly lower than the May data, which was a record. The Services PMI has also had 12 consecutive monthly readings higher than the expansionary level of 50.

The Reserve Bank of Australia announces its monetary-policy decision. The central bank is expected to keep its cash target rate unchanged at 0.1%, as parts of the country have entered lockdown again to fight the Delta variant of the virus that causes Covid-19.

The BLS releases the Job Openings and Labor Turnover Survey for May. Economists forecast 9.3 million job openings, matching the April figure, the highest since the data were first collected in December 2000.

The Federal Open Market Committee releases minutes from its mid-June monetary-policy meeting. Fed officials signaled that interest rates would rise sooner and faster than Wall Street had expected prior to the meeting, as inflation is rising at its fastest pace since 2008. Seven officials now expect rates to be lifted next year, compared with four in March.

The Mortgage Bankers Association reports mortgage applications for the week ending on July 2. Mortgage applications declined 6.9% this past week and have fallen in four of the past six weekly surveys, as supply constraints have pushed home-price growth to record levels.

Stellantis, the automobile manufacturer formed earlier this year via the merger of

The Federal Reserve reports consumer credit data for May. Total outstanding consumer credit was a record $4.24 trillion in April, as the continued reopening of the economy and hot housing market spurred shoppers to take on more debt.

The Department of Labor reports initial jobless claims for the week ending on July 3. Claims averaged 392,750 a week in June, the lowest since February of last year.

Italy hosts a G20 summit of finance ministers and central bank governors. The confab runs from July 9 to July 10 in Venice. U.S. Treasury Secretary Janet Yellen will attend, as the Biden administration pushes for a global minimum corporate tax rate of at least 15%. This past week, 130 countries, representing more than 90% of global GDP, backed the minimum tax rate after two days of negotiations in Paris.