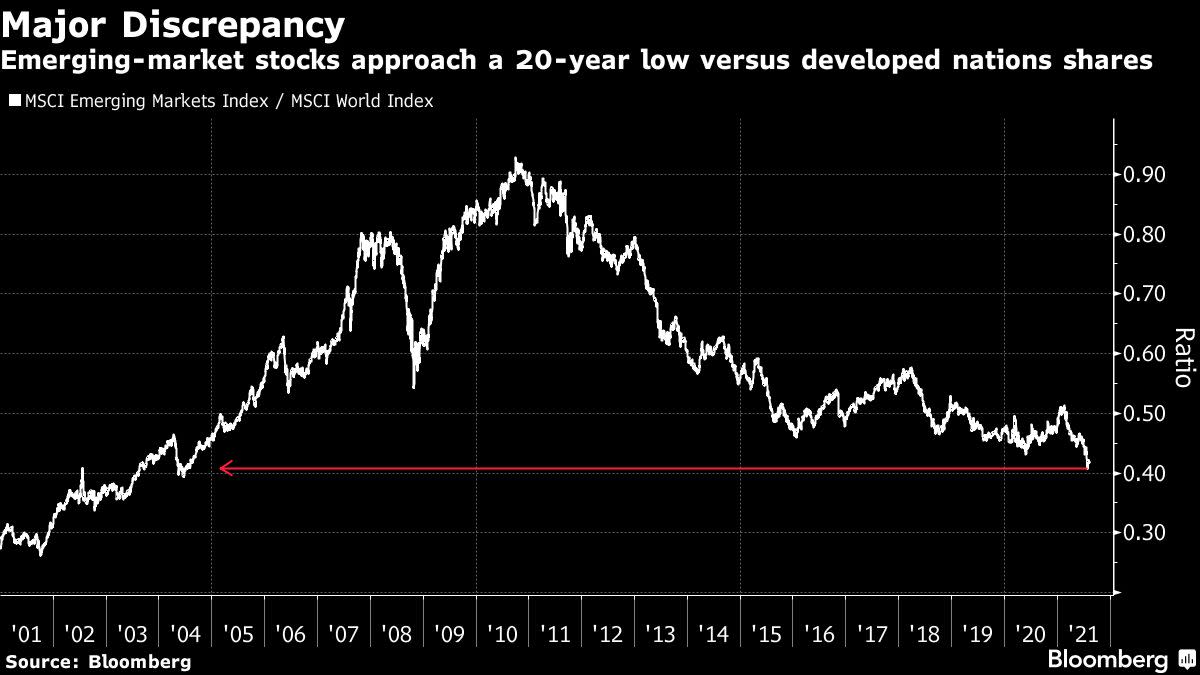 (Bloomberg) — Elevated commodity prices and expectations for earnings growth are igniting bullish bets on emerging-market equities after more than a decade of underperformance that left them approaching a 20-year low against developed-nation stocks. Goldman Sachs Group Inc., Bank of America Corp. and Lazard Asset Management expect a boost for developing equities as investors capitalize


(Bloomberg) — Elevated commodity prices and expectations for earnings growth are igniting bullish bets on emerging-market equities after more than a decade of underperformance that left them approaching a 20-year low against developed-nation stocks.

Goldman Sachs Group Inc., Bank of America Corp. and Lazard Asset Management expect a boost for developing equities as investors capitalize on cheap valuations once vaccine rollouts pick up, helping the global economy to recover from the pandemic. South Africa, Russia and Brazil are among markets set to benefit, even as China’s regulatory crackdown continues to weigh on Asian equities.

In the decade following the global financial crisis, MSCI Inc.’s emerging-market stock index gained just 8%, while the benchmark for developed nations more than doubled. That’s partly due to the slowdown of Chinese economic growth from above 10% in 2010 to around 6% by the end of the decade, resulting in a decline for commodity prices and weak earnings growth.

Then came the pandemic. While stocks across the board initially recovered strongly from March 2020 lows, those in emerging markets have fallen behind again. MSCI’s developed-market stock index has returned about 14% since the beginning of 2021, while its emerging-market counterpart fell 5%.

That may change in coming months as the global economic recovery gathers steam, inflation picks up, and raw materials stay buoyant, driven by infrastructure projects from China to the U.S.

There are signs the turn has already started. Capital flows into emerging-market equities in Eastern Europe, the Middle East and Africa accelerated since March — beating flows into bond funds by the most since 2014 — as investors rotated into value stocks, according to BofA.

“We expect this trend to continue given supportive macro drivers and equity valuations,” BofA cross-asset strategist Jure Jeric said in a note. While the energy sector has been the biggest beneficiary thus far, supporting Russian equities, there’s scope for increased inflows into other value sectors including financials and materials, with South Africa a receiving a boost from the latter, he said.

Meanwhile, Goldman Sachs is tactically “quite upbeat” on developing stocks, according to Caesar Maasry, head of the emerging-markets cross-asset strategy team, which favors equities and currencies in Brazil, Mexico, and Russia. “We generally find a ‘return to normalcy’ not priced into the market.”

Franklin Templeton Investments flags technology as a driver of emerging-market stock gains, benefiting countries like South Korea and Taiwan. Those two nations have managed the pandemic better than most, and their tech-dominated markets made them an attractive investment during the crisis, said Andrew Ness, a portfolio manager at Franklin Templeton. The firm remains cautious on emerging-market equities but has turned more optimistic due to low valuations, according to head of research Gene Podkamine.

While GDP growth in emerging markets has lagged that in developed nations in 2021, that may start changing as soon as the fourth quarter as activity starts to slow in developed economies and amid higher commodity prices, according to Lazard.

“Given the position many emerging-markets companies hold in the global supply chain, a pick-up in capital spending around the world is a very good signal for emerging markets equities overall,” Lazard strategists wrote in a report. That holds particularly for “growth-sensitive stocks, names that benefit from higher commodities prices, and those that produce goods, rather than services,” they said.

Over the last decade, the outperformance of U.S. stocks had a lot to do with the plush liquidity from the Fed — money that mostly failed to reach emerging markets. When the liquidity is taken away, stocks around the world may suffer a temporary shock, but the U.S. would lose its edge. That supports the idea that emerging-market stocks can outperform in a post-stimulus world.

That’s not to say there aren’t any key fundamental risks lying ahead for emerging-market stocks. Beijing’s regulatory crackdown on technology companies has been a factor in the underperformance of MSCI’s EM index this year, as Chinese equities account for almost one-third of the gauge.

While regulatory reforms could continue to depress Chinese stocks, it’s unlikely to spill over into the wider emerging-market complex, according to Goldman Sachs. Concerns about China’s economic growth, however, are warranted, the lender said in an Aug. 18 report. Developed nations outside of North Asia will continue to outperform the MSCI EM index, making them a “higher-conviction” holding, it said.

Developing-nation equities also proved their sensitivity to the prospects of tapering after they slumped along with global stocks after the Federal Reserve signaled that it could start paring stimulus from later this year. The Fed’s minutes also led to a dip in commodity prices as they boosted the dollar on Thursday, further pressuring developing-nation equities.

Not everyone is fully sold that the worst has passed. The BlackRock Investment Institute downgraded emerging-market equities to neutral earlier this month over uncertainty about the U.S. dollar outlook and tighter policy.

“We believe that EM growth is more at risk of permanent scarring over the long term due to slow vaccination rates and limited policy space,” said Wei Li, the firm’s global chief investment strategist, adding that the equity risk premium is below the historical average for developing-nations.

Others are buying into the growth story, but warn that it may take time. State Street Global Markets multi-asset strategist Daniel Gerard thinks emerging-market headwinds, like uncertainty around the Chinese regulatory environment, will prevent their equities from outperforming in the medium-term. Over the long haul, he sees “tremendous opportunities” as countries reduce reliance on physical infrastructure in favor of technology.

“Once vaccination rates improve in emerging markets, we expect not only for EM equities to outperform EM debt, but EM equities to catch up to developed-market equities,” Gerard said. “Don’t discount the EM consumer when the pandemic’s grip on consumer activity fades.”

South Korea’s rate decision on Thursday will be closely watched, with six of 11 economists surveyed by Bloomberg predicting that the central bank will keep rates on holdThe remaining five expect a 25-basis-point hikeRate-hike expectations have tumbled, with swaps now pricing in 22 basis points of increase in the next three months, compared with 37 basis points at end-JulyDoubts have risen over the trajectory of South Korea’s policy after the Reserve Bank of New Zealand held benchmark rates following a lockdown to contain a new wave of virus casesCitigroup maintains its call for a 25-basis point hike at the upcoming meeting as concerns over financial imbalances outweigh the growth risks, strategists led by Johanna Chua wrote in an Aug. 19 research noteSri Lanka’s central bank unexpectedly increased policy rates on Aug. 19, becoming the first among 13 Asia-Pacific peers to hike rates since Pakistan in July 2019Elsewhere, Hungary’s central bank may raise the main rate by 30 basis points to 1.5% on Tuesday to combat the European Union’s fastest inflation rateThe forint has outpaced all of its peers in the past monthIsrael is set to maintain the base rate at 0.1% on Monday, with higher Covid-19 cases threatening the economic rebound

What Else to Watch

Malaysia will release July inflation numbers on Wednesday, with the report expected to show that prices rose 3% from a year earlier after gaining 3.4% in JuneInflation eased in the previous two months as a lockdown in large parts of the country weighed on growthIsmail Sabri Yaakob was sworn in on Saturday as Malaysia’s third prime minister in 18 months, heralding the return of a pro-Malay party following weeks of political upheavalTaiwan is expected to report Monday that industrial production growth moderated in July while maintaining a double-digit paceThe Taiwan dollar is the top-performing Asian currency this yearThailand’s customs trade report on Tuesday is forecast to show growth in imports outpaced that of exportsThis will be a further drag on the current account, which is expected to fall into a deficit this year for the first time since 2013, according to a forecast from a Thai government agencyThe lack of a recovery in tourism and manufacturing has weighed on the baht, the worst-performing currency in Asia this yearIn Mexico, traders will monitor a slew of data for clues on the nation’s recovery, from retail sales for June on Monday and bi-weekly CPI figures on Tuesday to July employment numbers on ThursdayA reading of the nation’s final second-quarter GDP growth on Wednesday will probably be unchanged from the 19.7% estimated in July, according to Bloomberg EconomicsJune economic activity figures scheduled for the same day are expected to show an annual increase, while remaining below pre-pandemic levelsInvestors will also watch Mexico’s central bank minutes on Thursday for clues about the path ahead for policyA reading of Brazilian IPCA-15 inflation data on Wednesday will be parsed for clues as the central bank appears set to increase its key rates by 100-basis points amid concerns about rising pricesBrazil’s July current account data will be released on Wednesday