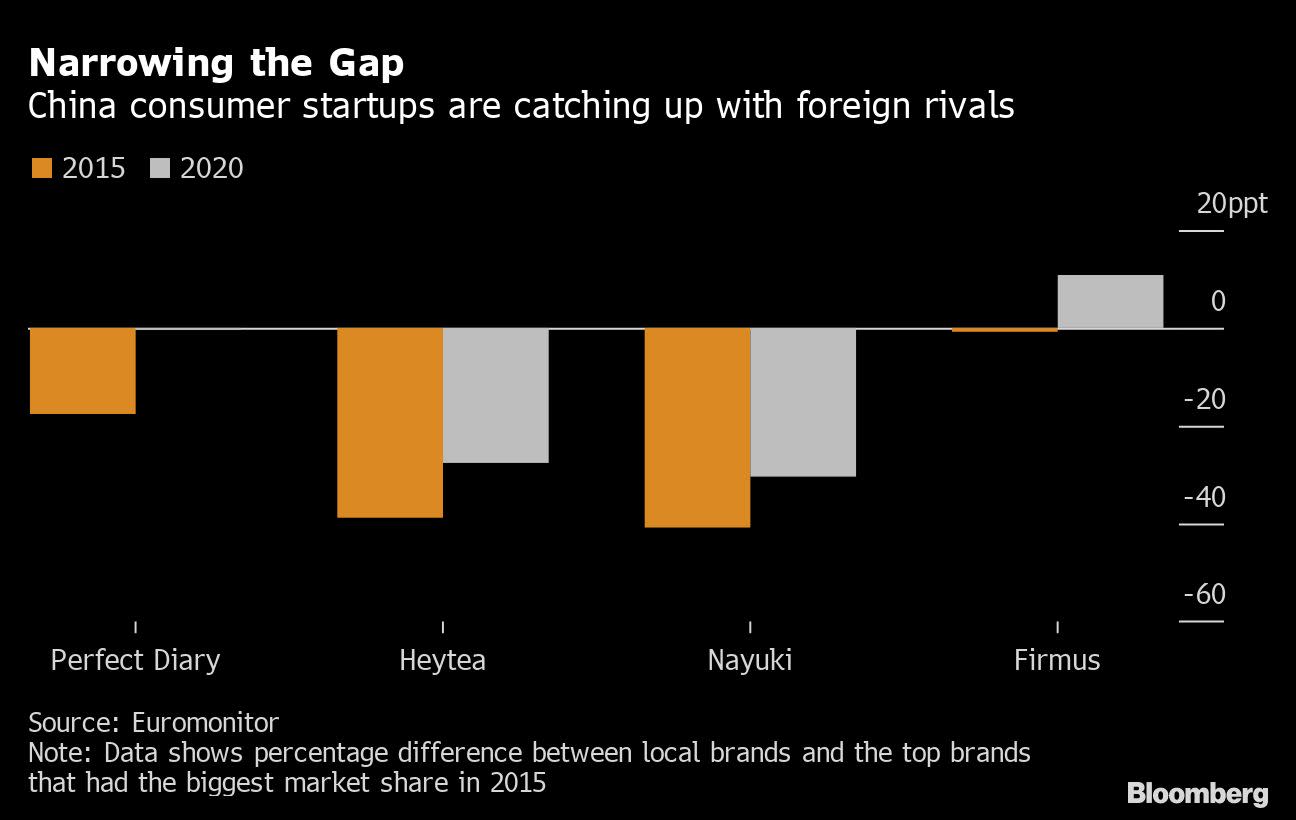 (Bloomberg) — China’s intensifying crackdown on technology companies is proving to be a cautionary tale for investors in the nation’s startups, with one notable exception: consumer brands. From cosmetics to bubble tea, Chinese ventures making waves among a new generation of shoppers are becoming a magnet for funds hunting for their next big hit. Investors


(Bloomberg) — China’s intensifying crackdown on technology companies is proving to be a cautionary tale for investors in the nation’s startups, with one notable exception: consumer brands.

From cosmetics to bubble tea, Chinese ventures making waves among a new generation of shoppers are becoming a magnet for funds hunting for their next big hit. Investors may see such companies as a viable alternative to tech startups because the government, rather than clamping down, is pushing to foster domestic champions that can fuel spending and compete with the likes of Coca-Cola Co. and Nike Inc.

Chinese brands are grabbing market share from global rivals in the world’s largest consumer market. Even before the tech crackdown, consumer-sector startups including healthy beverage maker Genki Forest and KKR & Co.-backed dairy producer Adopt A Cow were drawing more funding — about $62 billion since 2018, according to data provider Preqin Ltd. While that’s dwarfed by the $112 billion put into tech, the number is expected to increase in coming years.

“The next decade will be the golden age for the rise of Chinese brands,” said Frank Wei, co-head of Warburg Pincus China, which invested in Genki Forest, valued at $6 billion. “The rise of Generation Z reshapes the industry.”

China’s decision to curb business of ride-hailing giant Didi Global Inc. days after its U.S. listing is the latest bombshell for tech investors, who have seen a months-long clampdown hurt shares of companies from Alibaba Group Holding Ltd. to Tencent Holdings Ltd.

Authorities in Beijing are worried that tech firms listing in the U.S. pose a security risk because of the vast troves of data they hold. So far they are focusing on internet companies — which are most adept at harnessing and employing user information — rather than those that provide everyday products.

The consumer sector is a good option for capital to shift to because it faces much lower policy risks than tech and education — which has also faced a crackdown — a person from a Shanghai-based private equity firm said, asking not to be identified because of the sensitivity of the matter. On the downside, consumer companies face fierce competition and uncertain growth prospects, the person said.

One Chinese venture capital business is considering shifting its focus to categories that are most likely to get government support and favorable policies, including local consumer brands and environment-friendly enterprises, a person at the company said.

Once regarded as cheap and inferior, Chinese brands saw transactions grow 6% more than that of foreign counterparts in 2020, according to a research report by e-commerce platform JD.com Inc. Investors have backed more than 3,500 deals in the nation’s consumer discretionary sector since 2018, Preqin figures show.

Yatsen Holding Ltd., owner of cosmetics house Perfect Diary, has become a growing threat to the likes of L’Oréal and Estée Lauder and stands as the second-largest brand, with 6.7% of the crowded market for color make-up such as lipstick and mascara, Euromonitor estimates. It attracted investors including Warburg Pincus and Hillhouse before listing in the U.S. last November.

Heytea, a Shenzhen-based teahouse chain, is favored by the likes of IDG, Sequoia China and Hillhouse and is now valued at more than 60 billion yuan ($9.2 billion) after its latest round of fundraising, according to a person familiar with the matter. The company declined to comment.

One reason for the rapid rise of local brands is their ability to reach customers through social media and livestreaming shopping platforms. Online goods sold via livestreaming could grow 25% to 1.2 trillion yuan this year, according to consultant iiMedia Research.

“Social media enables new brands to be recognized much faster than via traditional marketing channels,” said Helen Wong of Qiming Venture Partners. “Therefore, the consumer startups are more attractive to us than before as our investment is expected to pay back sooner.”

Companies like Hangzhou-based Adopt A Cow devote most of their marketing budgets to livestreaming. The direct-to-consumer firm allows people to track a cow online and works with influencers including Qianxun (Hangzhou) Co., co-founded by China’s millionaire livestreaming queen Viya.

Livestreaming platforms “are giving birth to a plethora of new Chinese brands,” said Zhao Ran, president of Qianxun (Hangzhou), which works with more than 20,000 of them. They are devoting more of their budgets to such marketing than their foreign counterparts, which are trying to catch up on the trend, he added.

Nationalism has also played a role in the shift toward domestic names. Global titans including Nike and Adidas AG are facing pressure in China after shoppers boycotted them for taking a stand against the treatment of Muslim Uyghurs in the Xinjiang region.

Still, valuations are reaching frothy territory, with multiple funds chasing the same companies to convince founders that they can bring in resources beyond cash.

“Normally, a decision process to invest in a startup may take two months but now, anxious investors can shorten the process to just two weeks, skipping some steps such as issuing term sheets or just doing very simple due diligence,” said Loreal Chen, a Shanghai-based financial adviser who helps link founders with venture capital and private equity firms.

The investments can be risky. A slew of Chinese brands have gone under just as fast as they emerged. Eye-shadow seller Apinkbaby, which had more than 180,000 online followers, went bankrupt earlier this year.

For now, Genki Forest’s President Zhang Guizhou is banking on the billions that come with the rising interest in home-grown champions.

(Updates with number of deals in the 11th paragraph)