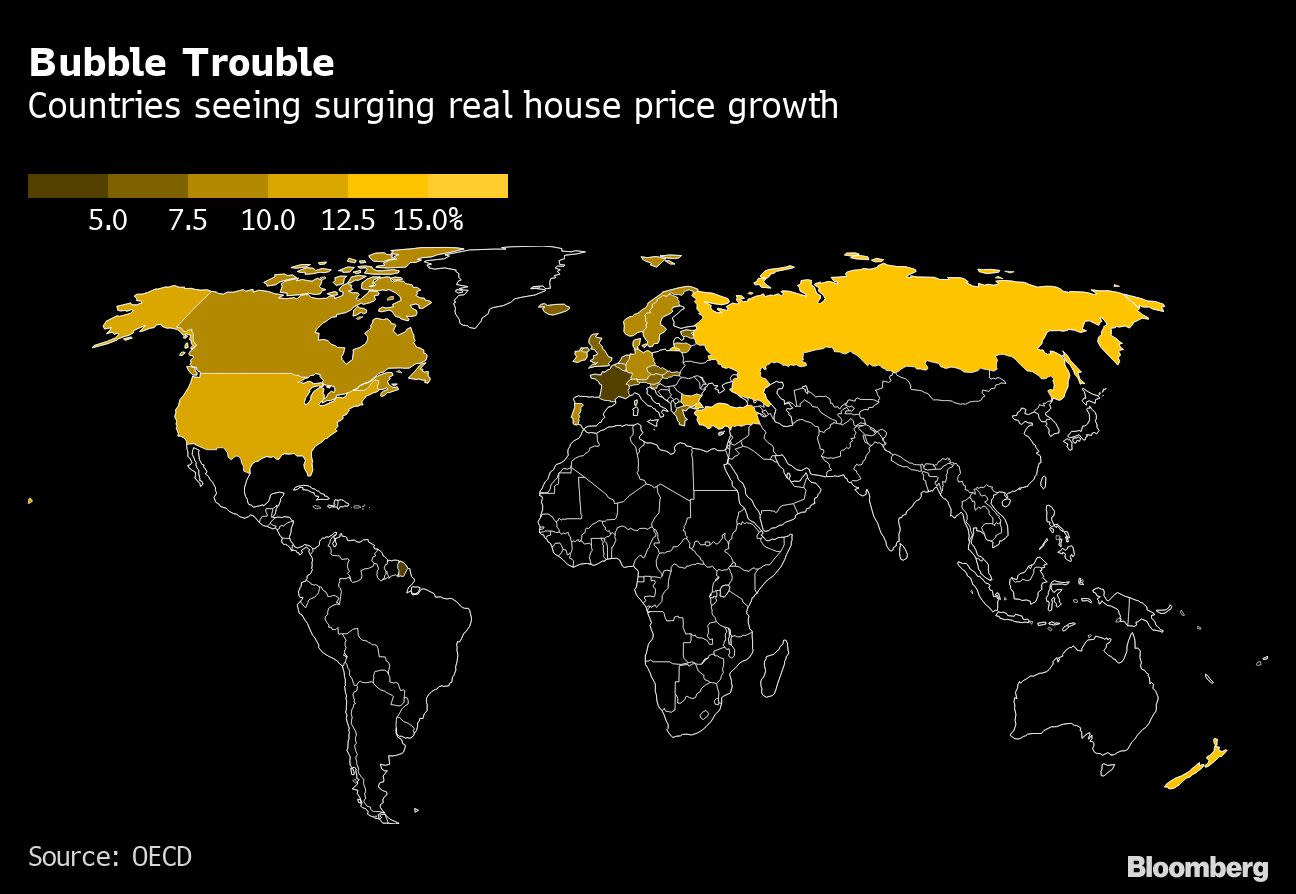 (Bloomberg) — Sign up for the New Economy Daily newsletter, follow us @economics and subscribe to our podcast. Surging house prices across much of the globe are emerging as a key test for central banks’ ability to rein in their crisis support. Withdrawing stimulus too slowly risks inflating real estate further and worsening financial stability

Surging house prices across much of the globe are emerging as a key test for central banks’ ability to rein in their crisis support.

With memories of the global financial crisis that was triggered by a housing bust still fresh in policy makers minds, how to keep a grip on soaring house prices is a dilemma in the forefront of deliberations as recovering growth sees some central banks discuss slowing asset purchases and even raising interest rates.

Federal Reserve officials who favor tapering their bond buying program have cited rising house prices as one reason to do so. In particular, they are looking hard at the Fed’s purchases of mortgage backed securities, which some worry are stoking housing demand in an already hot market.

In the coming week, central bankers in New Zealand, South Korea and Canada meet to set policy, with soaring home prices in each spurring pressure to do something to keep homes affordable for regular workers.

New Zealand policy makers are battling the hottest property market in the world, according to the Bloomberg Economics global bubble ranking. The central bank, which meets Wednesday, has been given another tool to tackle the issue, and its projections for the official cash rate show it starting to rise in the second half of 2022.

Facing criticism for its role in stoking housing prices, Canada’s central bank has been among the first from advanced economies to shift to a less expansionary policy, with another round of tapering expected at a policy decision also on Wednesday.

The Bank of Korea last month warned that real estate is “significantly overpriced” and the burden of household debt repayment is growing. But a worsening virus outbreak may be a more pressing concern at Thursday’s policy meeting in Seoul.

In its biggest strategic rethink since the creation of the euro, the European Central Bank this month raised its inflation target and in a nod to housing pressures, officials will start considering owner-occupied housing costs in their supplementary measures of inflation.

The Bank of England last month indicated unease about the U.K. housing market. Norges Bank is another authority to have signaled it’s worried about the effect of ultra-low rates on the housing market and the risk of a build-up of financial imbalances.

The Bank for International Settlements used its annual report released last month to warn that house prices had risen more steeply during the pandemic than fundamentals would suggest, increasing the sector’s vulnerability if borrowing costs rise.

While the unwinding of pandemic-era is support is expected to be gradual for most central banks, how to do so without hurting mortgage holders will be a key challenge, according to Kazuo Momma, who used to be in charge of monetary policy at the Bank of Japan.

“Monetary policy is a blunt tool,” said Momma, who now works as an economist at Mizuho Research Institute. “If it is used for some specific purposes like restraining housing market activities, that could lead to other problems like overkilling the economic recovery.”

New Zealand, Canada and Sweden rank as the world’s frothiest housing markets, based on the key indicators used in the Bloomberg Economics dashboard focused on member countries of the Organisation for Economic Co-operation and Development. The U.K. and the U.S. are also near the top of the risk rankings.

As many economies still grapple with the virus or slow loan growth, central bankers may look for alternatives to interest-rate hikes such as changes to loan-to-value limits or risk weighting of mortgages — so called macro-prudential policy.

Yet such measures aren’t guaranteed to succeed because other dynamics like inadequate supply or government tax policies are important variables for housing too. And while ever cheap money is gushing from central banks, such measures are likely to struggle to rein in prices.

“The best approach would be to stop the further expansion of central bank balance sheets,” according to Gunther Schnabl of Leipzig University, who is an expert on international monetary systems. “As a second step, interest rates could be increased in a very slow and diligent manner over a long time period.”

Another possibility is that house prices reach a natural plateau. U.K. house prices, for example, fell for the first time in five months in June, a sign that the property market may have lost momentum as a tax incentive was due to come to an end.

There’s no sign of that in the U.S. though, where demand for homes remains strong despite record-high prices. Pending home sales increased across all U.S. regions in May, with the Northeast and West posting the largest gains.

While navigating the housing boom won’t be easy for central banks, it may not be too late to ward off the next crisis. Owner-occupy demand versus speculative buying remains a strong driver of growth. Banks aren’t showing signs of the kind of loose lending that preceded the global financial crisis, according to James Pomeroy, a global economist at HSBC Holdings Plc.

“If house prices are rising due to a shift in supply versus demand, which the pandemic has created due to more remote working and people wanting more space, it may not trigger a crisis in the same way as previous housing booms,” said Pomeroy. “The problems may arise further down the line, with younger people priced out of the property ladder even more.”

As they tip toe away from their crisis settings, monetary authorities in economies with heavily indebted households will need to be especially careful, said Alicia Garcia Herrero, chief economist for Asia Pacific at Natixis who used to work for the ECB and International Monetary Fund.