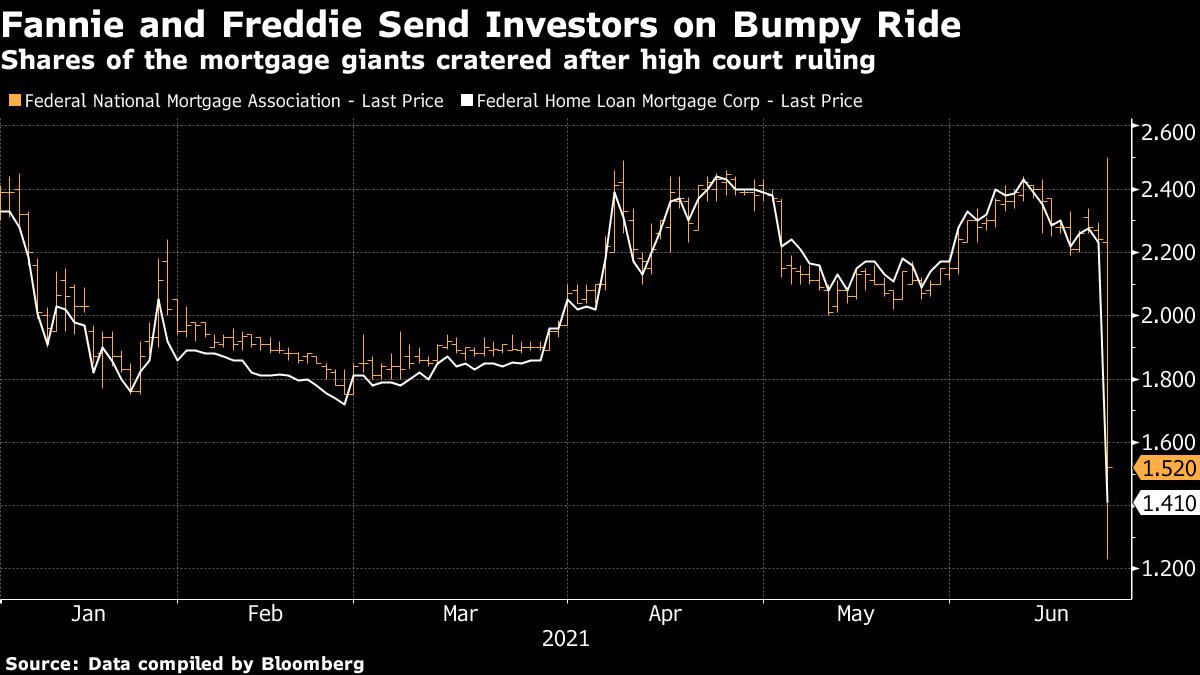 (Bloomberg) — In one fell swoop, the Supreme Court crushed Fannie Mae and Freddie Mac shareholders and gave President Joe Biden carte blanche to rewrite the rules for the U.S.’s massive housing market. Left unanswered was the same question that’s befuddled Washington for more than a decade: Will anyone ever figure out what to do

Left unanswered was the same question that’s befuddled Washington for more than a decade: Will anyone ever figure out what to do with Fannie and Freddie, which backstop a whopping $5.7 trillion of mortgages?

The high court’s decision Wednesday largely shot down investors’ claims that Obama era regulators exceeded their authority when they decided to send nearly all of Fannie and Freddie’s profits to the U.S. Treasury — a ruling that could save the federal government more than $100 billion. The justices also made clear that the president can remove the head of the Federal Housing Finance Agency, Fannie and Freddie’s overseer.

Once the dust settled, Fannie and Freddie shares had both plunged more than 32%, the biggest one-day slide for the companies since February 2017. The bleeding was even worse for various share classes of preferred stock owned by major hedge funds, triggering losses that in some cases exceeded 60%.

Among firms likely hurt by the high court’s decision were Paulson & Co., Pershing Square Capital Management and Fairholme Funds Inc., which have sought for years to get their hands on Fannie and Freddie’s profits.

With a new FHFA appointee, Biden will in effect be able to control the standards and cost of loans backed by Fannie and Freddie, which make up around half of the mortgage market. While Calabria had moved to shrink Fannie’s and Freddie’s footprint, many housing analysts expect Biden to use Fannie and Freddie to make loans cheaper and easier to get for minority groups and less-well-off borrowers, who historically have found it more difficult to buy a home.

In addition to borrowers, those decisions affect lenders, mortgage-bond investors, and issuers of privately-backed mortgages that compete with Fannie and Freddie.

“Today’s decision gives President Biden the opportunity to make sure that we have an FHFA director who is committed to addressing the housing needs of renters and homeowners, and to making our housing system work for everyone,” Senate Banking Committee Chairman Sherrod Brown, an Ohio Democrat, said in a statement.

Fannie and Freddie are crucial to housing because they buy loans from lenders and package them into bonds while guaranteeing payment to investors if homeowners default. The process keeps the mortgage market humming and ensures borrowing rates remain low.

Fannie and Freddie got into trouble when the housing market tanked in the run-up to the Great Recession, prompting the government to take them over and rescue them with $187.5 billion in taxpayer funds. The firms have since become profitable again, paying out billions of dollars in dividends to the Treasury. Determining the future of companies, including how they might function outside of U.S. control, is the biggest policy decision remaining from the 2008 financial crisis.

The shareholders’ loss before the Supreme Court removes any pressure, at least for now, for Biden to break from the status quo, said Jim Vogel, an analyst at FHN Financial. That means Fannie and Freddie could remain in federal conservatorship for the foreseeable future, a situation that the Trump administration tried and failed to bring to an end. Investors had hoped that a win at the Supreme Court would put pressure on Biden to settle the cases and release the companies from government control.

The ruling “appears to lay to rest many of the lingering questions and ‘what-ifs’ surrounding how long Fannie and Freddie could continue their status as a ward of the federal government,” Vogel said. “The status quo can continue as long as the administration and Congress would like.”

Fannie and Freddie shareholders still have on-going lawsuits in other cases proceeding under different legal theories that they plan to continue fighting.

“The SCOTUS decision does not address claims by shareholders for just compensation under the Takings Clause or for damages for breach of their shareholder contracts,” Boies Schiller Flexner attorney Hamish Hume, who represents investors in another case, said in an email “We continue to vigorously litigate those claims in lower courts and believe they will ultimately prevail.”

Biden hasn’t nominated a replacement for Calabria or named an acting successor. The Senate would need to confirm a permanent FHFA director, but Biden is expected to install a temporary appointee much sooner. Whoever takes over the regulator, Compass Point Research & Trading’s Isaac Boltansky doesn’t anticipate major changes to housing finance.

“While our nation’s mortgage-finance system is a Frankenstein’s monster, and it is far from perfect, it continues to function well,” Boltansky said in an email. “Congress has neither the interest nor the capacity to fix something that is not broken.”

(Updates with comment from shareholder attorney in 15th paragraph.)