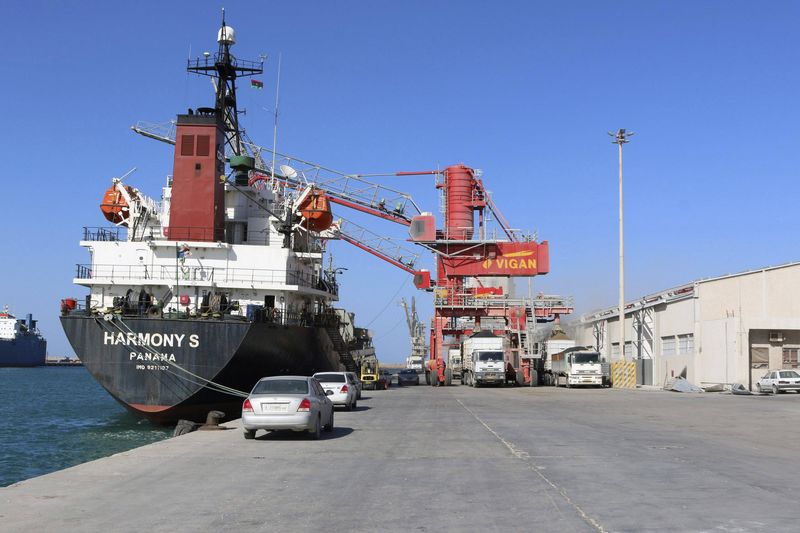 © Reuters. FILE PHOTO: Container ships are loaded at a container terminal in the harbor amid the outbreak of coronavirus disease (COVID-19) in Hamburg, Germany, March 29, 2021. REUTERS/Fabian Bimmer By Kate Abnett and Jonathan Saul BRUSSELS (Reuters) – Ship owners could be forced to pay for pollution from their vessels or face bans from

© Reuters. FILE PHOTO: Container ships are loaded at a container terminal in the harbor amid the outbreak of coronavirus disease (COVID-19) in Hamburg, Germany, March 29, 2021. REUTERS/Fabian Bimmer

By Kate Abnett and Jonathan Saul

BRUSSELS (Reuters) – Ship owners could be forced to pay for pollution from their vessels or face bans from European Union ports under draft plans to add shipping emissions to the bloc’s carbon market.

Shipping does not at present face EU emissions targets, but that is set to change under proposals to make its economy greener which are due to be published next month.

A draft proposal, seen by Reuters, would expand the carbon market to cover shipping emissions within the EU, international voyages to the bloc and those at berth in an EU port.

That would force owners to buy permits from the EU emissions trading system (ETS) when their ships pollute. The ETS currently covers Europe’s power plants and factories.

Shipping is seen as one of the trickiest sectors to decarbonise, with industry groups citing a lack of commercially viable green technologies.

Under the draft EU plan, shipping would be added to the ETS gradually from 2023, when ship owners must surrender enough CO2 permits to cover 20% of their emissions.

If a shipping company failed to comply with the ETS for two years running, an EU country could issue an “expulsion order” to the EU to ban ships owned by the company from the bloc’s ports, the draft document said.

The European Commission declined to comment on Wednesday on the proposal, which could change before it is published.

EU countries and the European Parliament, which has said it wants shipping added to the ETS in 2022, would need to negotiate final rules, which could take around two years.

The proposal would add roughly 90 million tonnes of CO2 emissions to the EU ETS, a slither of the EU’s overall greenhouse gas emissions of more than 3 billion tonnes.

With about 90% of world trade transported by sea, global shipping accounts for nearly 3% of the world’s CO2 emissions and these are expected to rise if left unchecked, threatening efforts to curb climate change.

The EU plan could put it on a collision course with the International Maritime Organization, which is coordinating measures to curb emissions among its more than 170 members.

Guy Platten, secretary general of the International Chamber of Shipping association, said the industry was “wholeheartedly behind putting a price on carbon”.

“However, it must be equitable for all nations, not just developed nations, and it must be decided at an international level, not on a region by region basis,” Platten told Reuters.

“Multiple, overlapping, regional carbon taxes will ultimately be bad for trade, bad for developing economies and bad for decarbonisation,” he added.

The IMO’s measures aim to halve maritime emissions by 2050, which falls far short of the EU’s plan to eliminate its economy-wide net emissions by then, a goal scientists say the world must meet to avoid the worst impact of climate change.