Earnings Seasons: Banks Are About to Kick Off Earningsn Keep an Eye on Citigroup Stock. 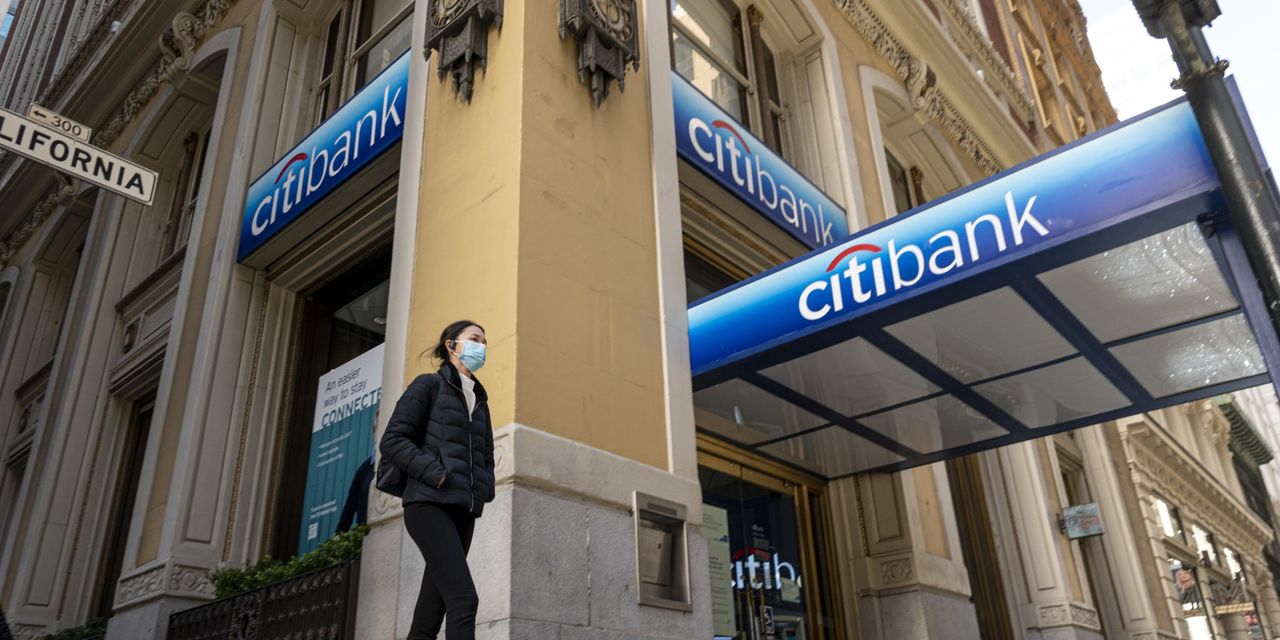 Text size A Citibank branch in San Francisco. David Paul Morris/Bloomberg Bank investors are hoping for something to get excited about this coming week when JPMorgan Chase, Goldman Sachs Group, and others report second-quarter results. They shouldn’t get their hopes up. It’s not that there hasn’t been good news for bank stocks. Just last month,

and others report second-quarter results. They shouldn’t get their hopes up.

It’s not that there hasn’t been good news for bank stocks. Just last month, the biggest banks easily passed the Federal Reserve’s annual stress tests, paving the way for them to return capital to shareholders without restrictions. They’ve also gotten a lift from improving economic conditions, the release of reserves set aside for bad loans that never materialized, and continued trading and deal-making activity. Banks have controlled what they can control and have come out the other side better for it.

(ticker: KBE) gained around 30% to start the year as the 10-year yield climbed as high as 1.75%. The ETF has given back about half its gains as the 10-year yield dropped below 1.3% this past week. While bank earnings should contain a lot of good news, there may not be enough to get the group moving higher. In fact, the opposite might be true.

Banks have proven they have a solid foundation, but the next leg of growth is more uncertain. Few expect that trading activity—which soared last year amid volatile market conditions—will match last year’s torrid pace. Across the sector, second-quarter trading revenue likely declined by roughly 30% year over year. Expectations of reserve releases and capital return to shareholders have already been priced into the shares. As for loan growth, expectations are weak as loan activity has likely been muted.

Bank stocks aren’t nearly as cheap as they were a year ago, when many were trading below tangible book value, but compared with the broad market, they still look cheap. The SPDR S&P Bank ETF currently trades at 11.1 times 12-month forward earnings, while the S&P 500 trades at 21.6 times.

Against this backdrop, with banks strong but perhaps not as exciting and certainly not as cheap, few are as cheap as

(C), which trades at just 0.9 times tangible book and offers a 3% yield after falling 13% over the past month. Analysts surveyed by FactSet expect that Citigroup will earn $1.99 per share—roughly a fourfold increase from the challenging year-ago quarter.

Barron’s highlighted Citigroup earlier this year just as Jane Fraser was poised to become CEO. Prior to Fraser claiming the top spot, the bank was hit with a consent order by regulators for weaknesses in its internal controls. While there has been some analyst skepticism about how quickly Citigroup can correct those issues and at what cost, the Street generally agrees that with Fraser at the helm, the bank has a renewed sense of urgency to streamline its operations.

Citi’s cheap valuation makes up for a lot of those issues, says KBW analyst David Konrad. “We are assuming coverage of Citigroup with an Outperform rating partly due to a discounted valuation but also due to the negative sentiment on the stock,” he writes. Konrad sees Citi stock trading at $85 a share, almost 25% above Friday’s close.

It may take time, but Citi stock should pay off for patient investors.