Down $831 Billion, China Tech Firm Selloff May Be Far From Over 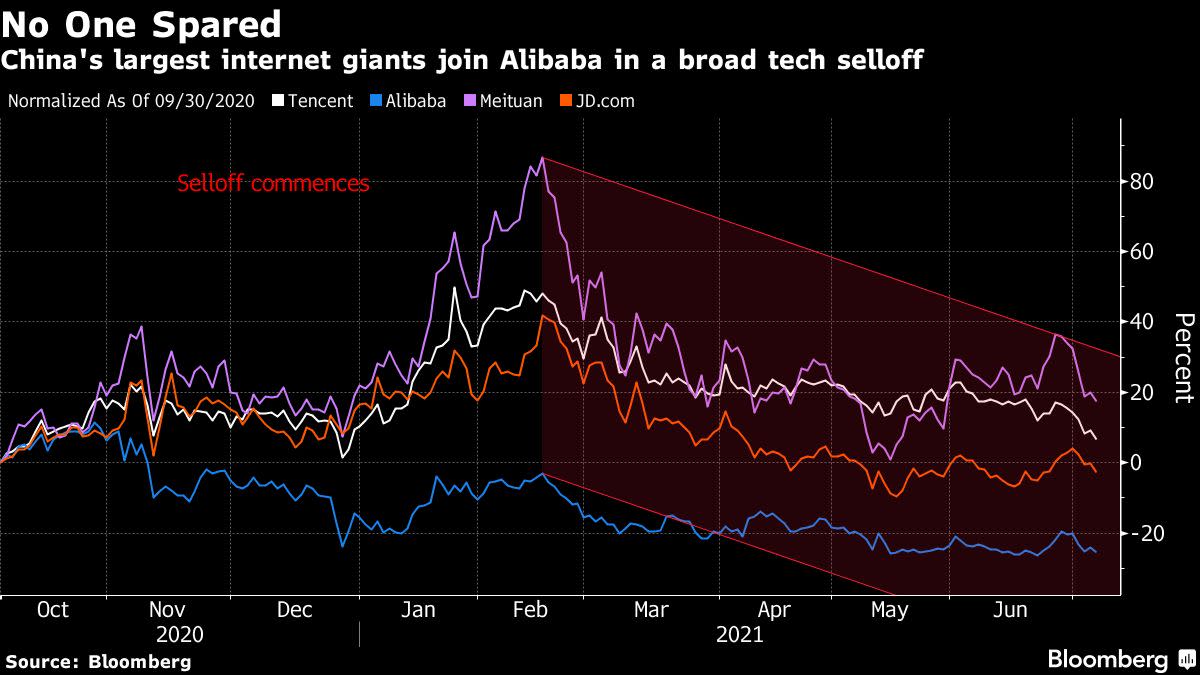 (Bloomberg) — China’s technology giants have seen a combined $827 billion wiped from their market value since a February peak, with Beijing’s expanding crackdown on the sector fueling investor concern that the selloff is far from over. Authorities on Tuesday issued a sweeping warning to the nation’s biggest companies, vowing to tighten oversight of data


(Bloomberg) — China’s technology giants have seen a combined $827 billion wiped from their market value since a February peak, with Beijing’s expanding crackdown on the sector fueling investor concern that the selloff is far from over.

“The selling will continue in the third quarter,” said Paul Pong, managing director at Pegasus Fund Managers Ltd. He says he sold two thirds of his technology stock holdings, including in Tencent and Alibaba, in May. “The measures from authorities will keep coming.”

The losses come from 10 firms including three U.S. listed names. Didi’s ADRs fell 20% stateside on Tuesday, erasing about $15 billion of its market value.

The Hang Seng Tech Index, whose members include many of China’s biggest tech companies, fell as much as 1.9% Wednesday, poised for its sixth consecutive day of declines. Tencent and Meituan slid as much as 3.7%, among the biggest decliners on the Hang Seng Index. Alibaba dropped 2.1%.

China’s sweeping warning Tuesday followed the opening of a security review by the nation’s internet regulator last week into Didi and a demand for app stores to remove it. The move stunned investors and industry executives and has hammered the Hong Kong shares of peers such as Tencent — one of Didi’s largest backers.

Investors worry that the latest security-based probes have opened a new front in President Xi Jinping’s broader campaign against China’s internet giants that began in November with the collapse of Ant Group Co.’s mega IPO and subsequent antitrust investigations into Alibaba and Meituan. Over the weekend, China moved against two other companies that also recently listed in New York — Full Truck Alliance Co. and Kanzhun Ltd.

Investors are likely to take “a sell first, talk later approach” to limit policy risks in their portfolio, said Justin Tang, the head of Asian research at United First Partners in Singapore. Stock prices are likely to be driven by near-term sentiment swings as opposed to company fundamentals, Jian Shi Cortesi, a Zurich-based fund manager at GAM Investment Management, wrote in an email.

To be sure, valuations may start to look attractive. Tencent, Alibaba and Baidu Inc. — among the earliest Chinese tech companies to enter public markets and the biggest, trade at an average of 22 times forecasted earnings over the next 12 months. That compares with the 10-year average of 26 times, according to data compiled by Bloomberg.

“In case the market sentiment goes into extreme pessimism and we see the Hang Seng Tech Index down 20% from here, it could be a rare opportunity to buy some fast-growing Chinese internet companies at extremely attractive prices,” GAM’s Jian Shi said.

The Hang Seng Tech Index is down 31% from its February high. Investors in mainland China, who accounted for about a third of turnover in Tencent shares this year, turned net sellers of the stock in June.

“While the long-term future of Chinese tech remains, it will be caveat emptor for investors in the near term,” said United First’s Tang.