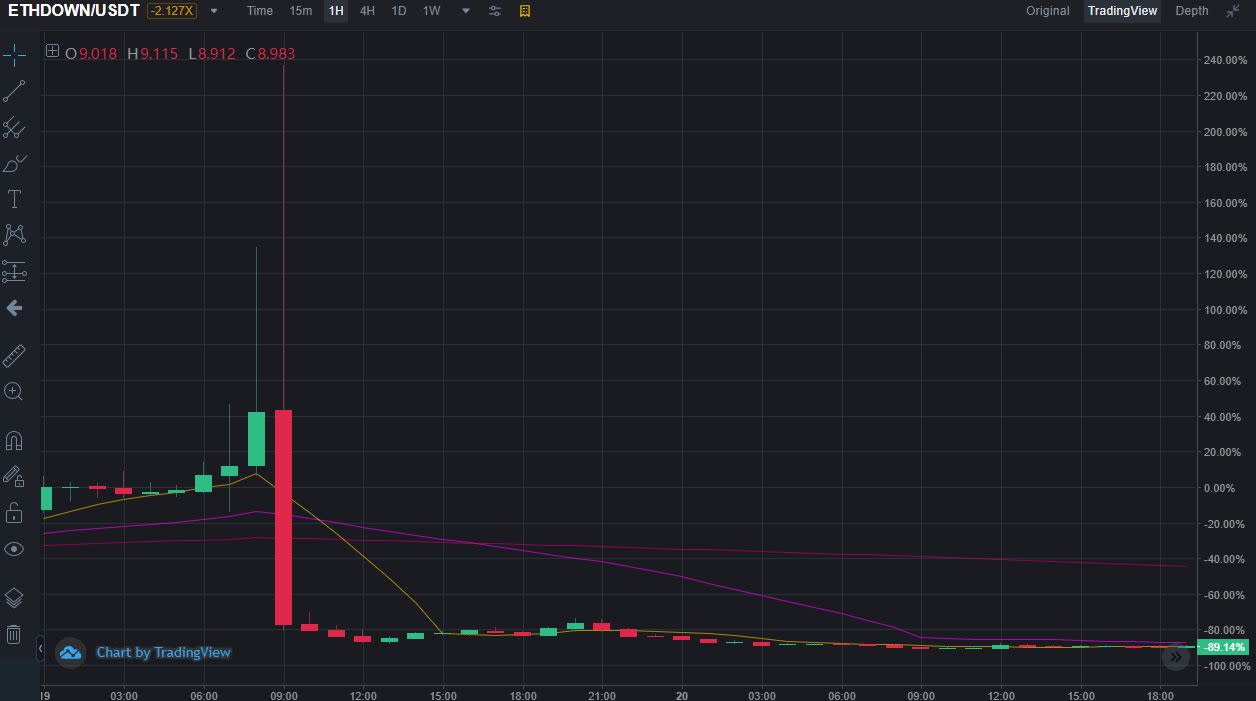 (Bloomberg) — On the day of one of the cryptocurrency market’s worst routs, Alex Holland woke up to a wave of messages from friends and family. They knew he had made a big wager recently that prices would fall. But when he went to check his account on the online exchange Binance, he saw that


(Bloomberg) — On the day of one of the cryptocurrency market’s worst routs, Alex Holland woke up to a wave of messages from friends and family. They knew he had made a big wager recently that prices would fall.

But when he went to check his account on the online exchange Binance, he saw that the value of his leveraged bet against Ethereum was sinking rather than reaping gains a few times greater than the declines in the second-largest cryptocurrency.

“I just kept blinking,” said the 59-year-old Canadian, who was left a paraplegic after a skiing accident. “I thought it was just a bug and they’d be fixing it.”

By the end of May 19, Ethereum would plummet roughly 20% and Holland’s so-called down token tumbled about 85%. The value was so low it appeared as zero on price charts.

In a way, it’s a cautionary tale as old as Wall Street — retail speculators burned by byzantine derivatives — amplified by a lack of regulation, croaky market plumbing and the extreme volatility of the $1.3 trillion crypto world.

It’s hard to know exactly how much value was wiped out. But a growing band of disgruntled Binance users are now organizing to pressure — with a combination of social media and legal threats — the exchange to compensate their losses. Regulators have also taken notice, with Binance facing increasing scrutiny in Asia, North America and Europe.

Holland’s records show from April to May 19 he put roughly $2,700 in the bearish tokens through a series of trades. Including his previous transactions, he estimates his investment totaled around $10,000.

Leveraged tokens are pitched by crypto exchanges as an easy way for amateurs to make outsized bets without the hassle of managing collateral or margin requirements. On Binance, the product uses futures to offer long or short exposure to cryptocurrencies with a unique twist: A leverage ratio that floats between 1.25 and 4 times. That means, in theory, a 20% plunge in a coin should translate into between a 25% and 80% gain.

The world’s largest crypto exchange touts the unpredictability as a feature, not a bug, to prevent front-running. But it’s also prompted traders to question how they are managed, especially during the manic swings that are also a feature of the market.

Holland’s experience was typical on May 19. Down tokens tied to the Litecoin and Tezos cryptocurrencies lost money despite betting on the right direction. Polkadot’s down token ended up worth less than three cents, plunging 95% from the prior day. At one point, both the tokens wagering on and against Ethereum were down roughly 75%.

May 19 was a day of tumult overall, with crypto platforms including Binance and Coinbase suffering disruptions to regular trading after negative tweets from Elon Musk and tightening restrictions in China sent investors fleeing.

As more traders wanted to cash out of bearish leveraged tokens, Binance said the outflows caused the leverage ratio to spike in some cases. When the program was forced to trim its short exposure in a rocky and illiquid market to lower the ratio again, it ended up losing money due to market conditions.

In other words, the product was forced to keep cutting positions at the worst time. That day, the Ethereum down tokens rebalanced 21 times, the majority of which happened over half an hour.

“We should note, nevertheless, that there were no identifiable issues or errors with the BLVT during the period,” a spokesman said in an email. “Binance users are informed in advance of the risks associated with any trading activities,” including through a training video and test of their understanding.

In the depths of the selloff, the platform suspended trading for most leveraged tokens. It now no longer allows tokens to be subscribed or redeemed during rebalancing.

The product is somewhat similar to leveraged exchange-traded funds, which typically rebalance at the end of each day to maintain a particular exposure. The difference is the Binance tokens only rebalance whenever the leverage ratio swings out of the 1.25-to-4-time range and based on a proprietary algorithm that determines the ratio.

One problem with the absence of regular rebalancing is the product would naturally get more leveraged just as the market is moving against it, warns Tim Leung, a professor of applied mathematics at the University of Washington who’s written a book about leveraged ETFs.

“It’s too opaque,” he said, commenting generally on a retail product structured this way. “An investor is looking at the historical leverage ratio and thinking it should be 2x, but there’s no guarantee the future leverage ratio is going to be two.”

There’s little retail traders can do by way of regulatory recourse. Binance operates as a constellation of entities in multiple jurisdictions, and its terms say that any disputes need to go through individual arbitration in Hong Kong and cannot give rise to class-action claims.

For Holland, it’s yet another blow to his long-time faith in cryptocurrencies. After initially accumulating some coins by running a crypto mining rig, he lost all of the money he put in QuadrigaCX, a Canadian exchange that wiped out at least $125 million of client money when it collapsed in 2019.

When it came to choosing another exchange, he thought he could go no wrong with the largest one in the crypto world.

“It was a major, major amount of money for me that died, even though I predicted everything properly,” he said from Calgary. “Given my situation, that was my one shot at retirement and now that’s pretty much all gone.”