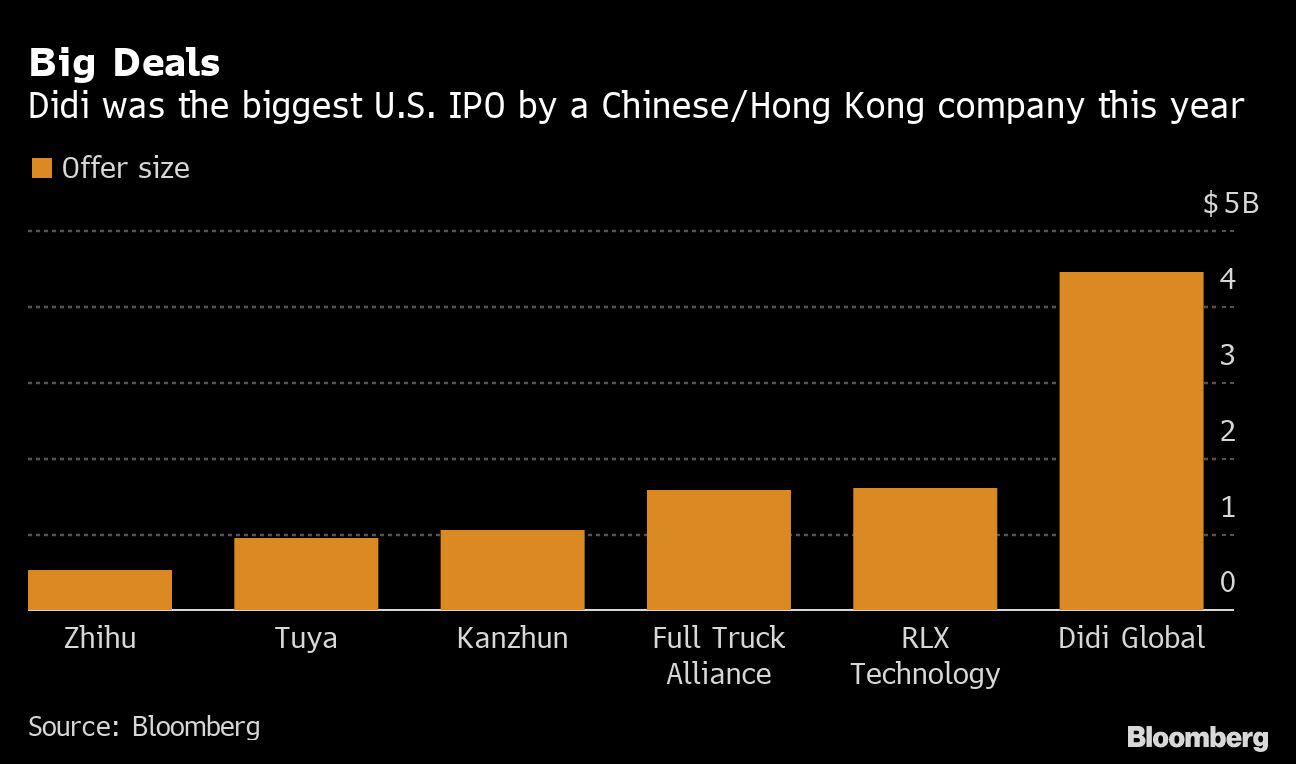 (Bloomberg) — Chinese companies hoping to list in the U.S. now face a harder task in pitching their shares to prospective investors. As Beijing probes Didi Global Inc. — China’s version of Uber — and two other firms that recently debuted on Wall Street, global equity managers are questioning if the regulatory threat posed by


(Bloomberg) — Chinese companies hoping to list in the U.S. now face a harder task in pitching their shares to prospective investors.

As Beijing probes Didi Global Inc. — China’s version of Uber — and two other firms that recently debuted on Wall Street, global equity managers are questioning if the regulatory threat posed by the Asian nation’s increasing efforts to control big data is a risk worth taking.

“The Didi situation reinforces the fact that China is annoyed by the flood of U.S. IPOs by Chinese tech companies, and is attempting to slow the reception of these IPOs in the West,” said Hans Albrecht, portfolio manager at Horizons ETFs Management Canada Inc. “While Chinese names look like better value, they will suffer from this overhang for some time.”

Beijing’s latest crackdown on the technology industry threatens to chill investor sentiment at a time when there are as many as 34 pending filings for U.S. listings by firms based in China or Hong Kong announced this year, according to data compiled by Bloomberg. Such deals have been running at a record pace, with more than $15 billion priced in New York IPOs so far this year.

QuickTake: What Is Didi and Why Is China Cracking Down on It?

Didi’s shares slid more than 5% on Friday as China said it’s starting a cybersecurity review of the ride-hailing company. Two days after that, the regulator said the firm had committed serious violations in the collection and usage of personal information. It then ordered the company’s app to be removed from stores.

Investors will be keenly watching the stock as trading resumes in the U.S. after Monday’s holiday. China is also probing Kanzhun Ltd., the owner of an online recruitment platform, and Full Truck Alliance Co., an Uber-like trucking startup. Both companies listed in the U.S. recently.

“The Chinese government could have stopped the IPOs from happening, like how they did with Ant,” said Sharif Farha, a Dubai-based portfolio manager at Safehouse Global Consumer Fund. “Instead, they allowed global investors to take pain, and consequently have broken trust with a lot of foreign investors. While we did not participate in any of these listings, we would imagine that several funds would consider exiting.”

One company poised to test sentiment soon is Hong Kong’s on-demand logistics and delivery firm Lalamove. It filed confidentially for a U.S. initial public offering last month, according to people with knowledge of the matter, and is seeking to raise at least $1 billion.