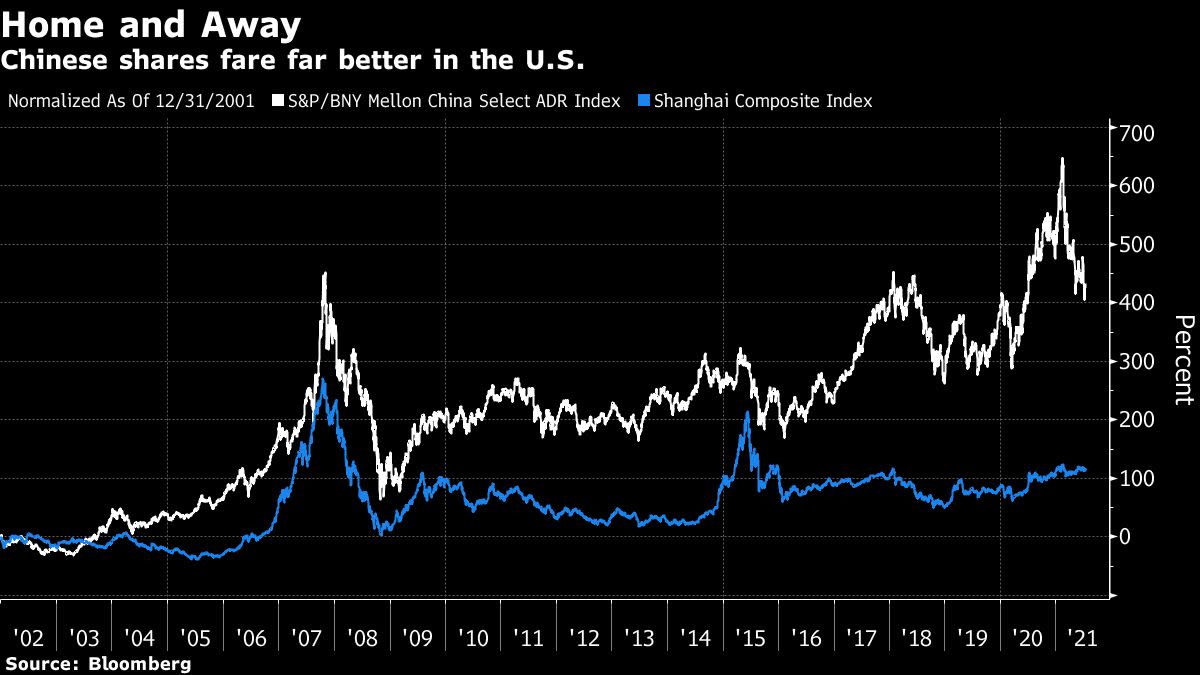 (Bloomberg) — For two decades Chinese tech firms have flocked to the U.S. stock market, drawn by a friendly regulatory environment and a vast pool of capital eager to invest in one of the world’s fastest-growing economies. Now, the juggernaut behind hundreds of companies worth $2 trillion appears stopped in its tracks. Beijing’s July 10


(Bloomberg) — For two decades Chinese tech firms have flocked to the U.S. stock market, drawn by a friendly regulatory environment and a vast pool of capital eager to invest in one of the world’s fastest-growing economies.

Now, the juggernaut behind hundreds of companies worth $2 trillion appears stopped in its tracks.

Beijing’s July 10 announcement that almost all businesses trying to go public in another country will require approval from a newly empowered cybersecurity regulator amounts to a death knell for Chinese initial public offerings in the U.S., according to long-time industry watchers.

“It’s unlikely there will be any U.S.-listed Chinese companies in five to 10 years, other than perhaps a few big ones with secondary listings,” said Paul Gillis, a professor at Peking University’s Guanghua School of Management in Beijing.

The clampdown, triggered by Didi Global Inc.’s decision to push ahead with a New York listing despite objections from regulators, is already sending shockwaves through markets. A gauge of U.S.-traded Chinese stocks has dropped almost 30% from its recent high. For investors in companies that have yet to list, there’s growing uncertainty over when they may get their money back. Wall Street firms are bracing for lucrative underwriting fees to dry up, while Hong Kong is set to benefit as Chinese companies look for alternative — and politically safer — venues closer to home.

It’s hard to overstate the importance U.S. markets have held for Chinese firms. The first wave began selling American depositary receipts — surrogate securities that allow investors to hold overseas shares — in 1999. Since then more than 400 Chinese companies picked U.S. exchanges for their primary listings, raising more than $100 billion, including most of the country’s technology industry. Their stocks later benefited from one of the longest bull markets in history.

Hong Kong-based website operator China.com Corp. began the trend when it went public on the Nasdaq in 1999 during the dotcom bubble. The stock, under the symbol CHINA, surged 236% on its debut, enriching founders and backers, and showing Chinese internet firms a pathway to foreign capital — if they could only find a way around the Communist Party’s strict regulatory controls.

Unlike companies in Hong Kong, whose laissez-faire approach to business meant there were few rules on company fund-raising, mainland-based private enterprises faced much higher hurdles. Foreign ownership in many industries, especially in the sensitive internet industry, was restricted, while an overseas listing required approval from China’s State Council, or cabinet.

To get around these obstacles, a compromise was found in the shape of a variable interest entity — a complex corporate structure used by most ADRs including Didi and Alibaba Group Holding Ltd. Under a VIE, which was pioneered by now-private Sina Corp. in 2000, Chinese companies are turned into foreign firms with shares that overseas investors can buy. Legally shaky, hard to understand, this solution nonetheless proved acceptable to U.S. investors, Wall Street and the Communist Party alike.

Back in China, the government was taking steps to modernize its stock market, which only reopened in 1990, having been shut forty years earlier following the Communist revolution. In 2009, the country launched the Nasdaq-style ChiNext board in Shenzhen. Under Xi Jinping, who became president in 2013, access to the outside world was greatly increased, including exchange trading links with Hong Kong that allowed foreign investors to buy mainland equities directly. In 2018, China began a trial program to rival ADRs, but it failed to gain traction.

The most radical step came in 2019 when Shanghai opened a new stock venue called Star board, which minimized red tape, allowed unprofitable companies to list onshore for the first time, and got rid of a cap on first-day price moves. It also scrapped an unwritten valuation ceiling which forced companies to sell their shares at 23 times earnings or less. But mainland exchanges still don’t allow for dual-class shares, popular with tech firms because they give founders more voting power. Hong Kong introduced the structure in 2018.

The goal was to create an environment which would enable Chinese tech firms to list successfully at home, and be less reliant on U.S. capital. This need became all the more pressing as tensions between Beijing and Washington increased during the latter part of former President Donald Trump’s presidency. Trump introduced tough new rules that mean Chinese firms may be kicked off exchanges in a few years’ time if they refuse to hand over financial information to U.S. regulators.

After Didi’s contentious June 30 IPO, it appears the Communist Party decided it had had enough.

“The death of ADRs was inevitable,” said Fraser Howie, author of ‘Red Capitalism: The Fragile Financial Foundation of China’s Extraordinary Rise.’ “What’s interesting is the mold and template that’s achieving that result. It’s coming from a mindset of control and clamping down on business. That’s very different to a mindset of reform and building markets domestically.”

Beijing’s move to regulate overseas IPOs coincides with stricter controls over China’s technology firms, many of which have near-monopolies in their fields and vast pools of user data. This campaign to rein in the tech industry has accelerated in recent months as Xi seeks to limit the influence of the billionaires who control these firms.

For Chinese companies already listed in the U.S., what happens next largely depends on what China does with VIEs. Banning them outright would be unlikely, as it would force firms to delist from foreign exchanges, unwind that structure and then relist — a costly process that would take years. The updated regulations are expected to be ready in a month or two, people familiar with the matter have said.

Hong Kong is increasingly looking like a viable alternative. For one, China plans to exempt Hong Kong IPOs from first seeking the approval of the country’s cybersecurity regulator, Bloomberg reported last week. In a forced U.S. delisting, firms that already sold shares in Hong Kong — like Alibaba and JD.com — can migrate their primary listing to the city. The delisted U.S. receipts, which can still trade off-exchange, won’t be worthless because they represent an economic interest in the company. Hong Kong’s open markets and greenback-pegged currency should facilitate the conversion.

Holders can sell their ADRs before they are delisted or convert them into the Hong Kong-listed common stock without much disruption. A company choosing to terminate its ADR program entirely can also pay out a dollar amount to investors.

Either way, it seems that the two-decade era that saw China’s most successful and powerful private firms list in the U.S. is coming to a close. The message from Beijing is clear: the Communist Party will have the final say on pretty much everything, including IPOs.

“It’s really important to own companies that are aligned with the direction of the Chinese government,” said Tom Masi, co-portfolio manager of GW&K Investment Management’s emerging wealth strategy fund, which has half its money invested in Chinese stocks. “I would not be financing companies that are going to circumvent anything that the Chinese government wants to accomplish.”