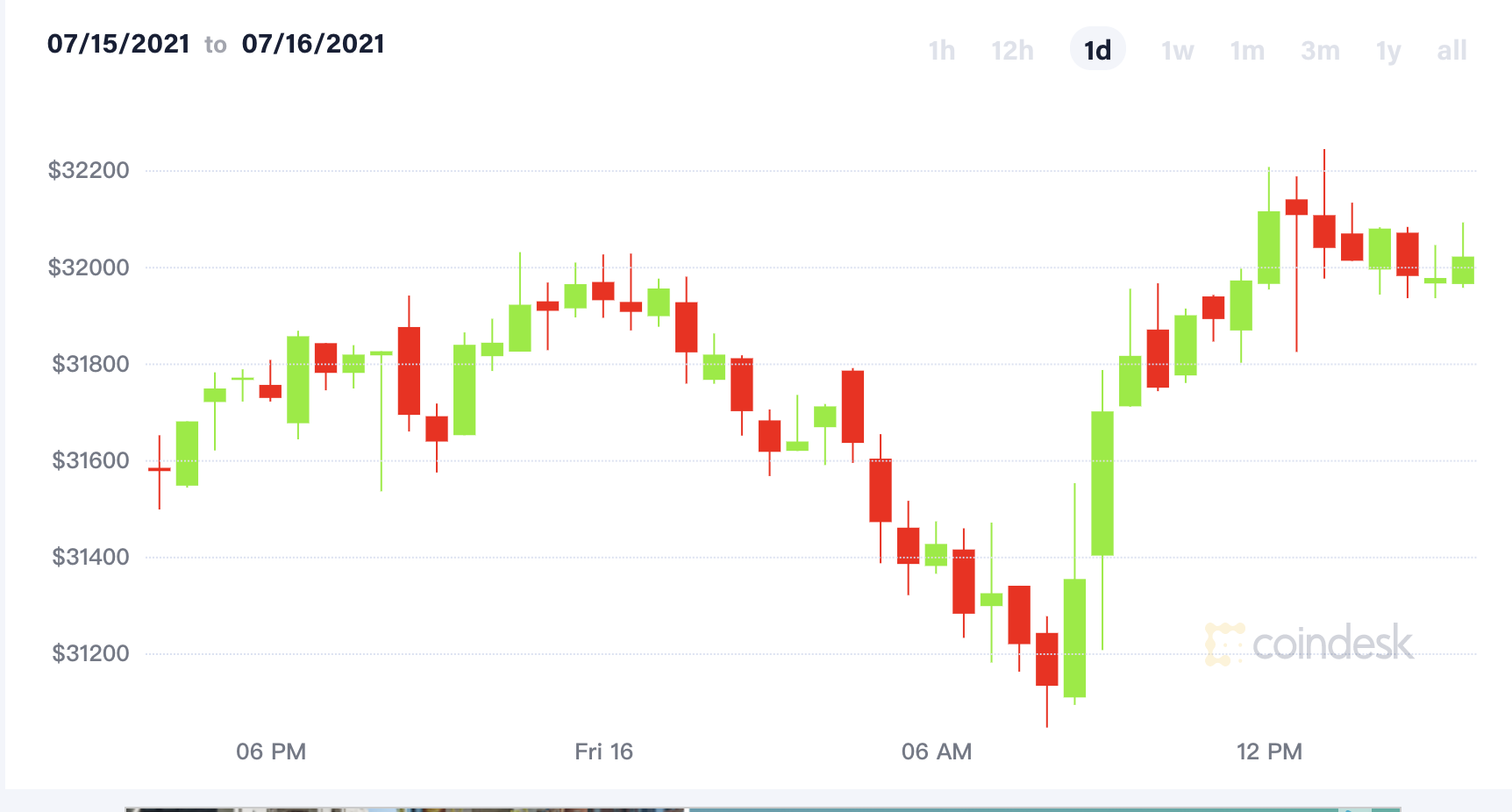 Bitcoin bounced to around $32,200 after touching a 2.5-week low early Friday near $31,000.  The largest cryptocurrency by market value may have been buoyed by a CoinDesk report that Bank of America has approved trading in bitcoin futures for some clients, according to Edward Moya, senior market analyst for Oanda.  “This is a big commitment

The largest cryptocurrency by market value may have been buoyed by a CoinDesk report that Bank of America has approved trading in bitcoin futures for some clients, according to Edward Moya, senior market analyst for Oanda.

“This is a big commitment for America’s second-largest bank and signals that interest in trading cryptocurrencies is here to stay,” Moya wrote in an email. “On Wall Street, if one bank sees opportunity in doing something risky, the rest will easily justify following suit.”

Related: El Salvador May Issue Its Own Stablecoin: Report

Analysts said bitcoin might be prepping for a price breakout – higher or lower – after trading in a range between roughly $30,000 and $40,000 for the past eight weeks.

The big concern is a drop below the psychological level of $30,000 might trigger additional selling as options traders look to square positions.

Related: Square Sets Out to Bring DeFi to Bitcoin

“There is a big move coming,” blockchain analyst William Clemente III wrote Friday in Anthony Pompliano’s newsletter.” Theoretically, we could be looking at this big move in the next few days but could take up to those full three weeks.”

The breakout looks more likely to be to the downside, based on the look of bitcoin’s price chart, according to Mati Greenspan, founder of the cryptocurrency and foreign-exchange analysis firm Quantum Economics.

“Bitcoin’s chart looks really ugly at the moment,” Greenspan wrote in his newsletter. “The downward slope that has materialized over the last few days gives the appearance that gravitational forces are calling for a retest of the red-line support at $20,000, the previous all-time high. In technical terms, this is known as capitulation.”

Earlier this month, Circle, the company behind the fast-growing dollar-linked stablecoin USDC, announced plans to become a public company at a $4.5 billion valuation, via a deal with a special-purpose acquisition corporation (SPAC).

Charlie Morris, founder of ByteTree Asset Management, speculated this week the deal could end up luring more investors to cryptocurrencies.

It’s “unquestionably the starter stock for the cautious,” Morris wrote July 14 in his weekly newsletter.

Big investors might find the stock hard to resist due to USDC’s fast growth: The stablecoin’s supply has soared to more than $25 billion, from about $3.9 billion at the start of the year. “It’s clear to the eye this company is growing like a weed,” Morris wrote.

What might make the new shares more attractive for portfolios is that USDC “powers crypto, yet has none of the volatility, making it a natural haven in comparison to the asset managers or miners whose fortunes are linked to crypto prices,” according to Morris.

But that might just be a camel’s nose under the tent:

“The old world will end up owning all of these stocks regardless, and that is why index funds always amuse me. They just buy whatever is stuck in front of them, meaning that investors who are trying hard to avoid crypto will end up owning it. Before long, everyone will be invested in crypto and crypto stocks, whether they like it or not, and Circle’s listing will be a crowd pleaser.”

What’s up with tether?

The parabolic growth in the market cap of stablecoin giant tether (USDT) suddenly came to a grinding halt at the end of May, just as bitcoin’s price was coming off its all-time highs.

According to analysts and market participants who spoke to CoinDesk’s Muyao Shen, the sudden pause reveals that the most traded cryptocurrency in the world is seeing its dominance threatened by three unprecedented challenges combining in a perfect storm to rattle the stablecoin.

An executive from Tether, while acknowledging the demand for USDT has fallen, argued the trend is not exclusive to the token.

“Demand for tether ebbs and flows, and has been impacted by lower demand in recent weeks,” Paolo Ardoino, chief technology officer at Tether, said in a written response via a spokesperson.

Most digital assets on CoinDesk 20 ended lower on Friday.