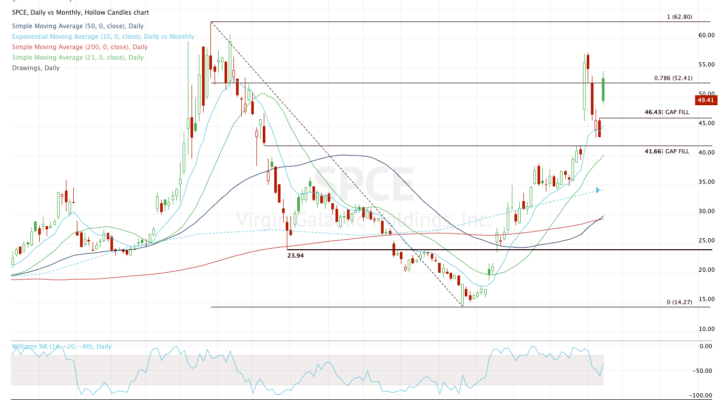 We got a better-than-expected jobs report on Friday morning, which helped fuel another run to new all-time highs in the S&P 500 and Nasdaq. And with a long holiday weekend ahead of us, let’s look at a few top stock trades for Tuesday. Top Stock Trades for Tuesday No. 1: Virgin Galactic (SPCE) Top stock


We got a better-than-expected jobs report on Friday morning, which helped fuel another run to new all-time highs in the S&P 500 and Nasdaq. And with a long holiday weekend ahead of us, let’s look at a few top stock trades for Tuesday.

Virgin Galactic (NYSE:SPCE) has had an insane last couple of days. Shares erupted higher last Friday on positive news, but have wobbled since. Shares then put in four-straight down days coming into this Friday, where SPCE stock again took off.

However, it’s now fading from the highs, as the 78.6% remains a hotly contested area between bulls and bears. We need clarity around this area.

If it continues as resistance, the $46.43 gap-fill level remains vulnerable. Same can be said of the 10-day moving average. Below both measures as well as this week’s low at $43.08 could put the other gap-fill measure in play at $41.66. That’s along with the 21-day moving average.

Coinbase (NASDAQ:COIN) has a pretty interesting setup. It’s interesting because not many people would look at this chart and find the positives. Most would link it to the bear market in Bitcoin (CCC:BTC-USD) and note the painful decline we’ve seen since Coinbase’s public debut.

To be fair, that is true. So is the fact that shares are being rejected by the 10-week and 50-day moving averages.

However, that doesn’t make the positive nonexistent. For instance, Coinbase has finally broken out of that nasty downtrend (blue line) it was in. Furthermore, after a nice rally, we’re getting a dip into the short-term moving averages.

From here, it’s important that these moving averages act as support. A break below the 21-day could put the $208 to $210 zone back on the table. On the upside, $261 is the level to watch.

A rotation over this mark not only puts Coinbase at new recent highs, but it also puts it over the 10-week and 50-day moving averages. That could open the door for a rally back to $300-plus.

On Friday morning, PayPal (NASDAQ:PYPL) gave bulls a daily-up rotation after a nice reset back to its short-term moving averages. So far, though, the stock is having trouble maintaining its opening-drive momentum.

That doesn’t mean the setup is dead, but it means short-term bulls need to be aware that this one could fail to bounce.

Notice these two things: How PayPal has found the 10-day moving as support and how long it’s gone without a test of this measure. The stock hit it on Thursday and bounced, then momentarily gave bulls the rotation they were looking for on Friday.

If it doesn’t bounce from here, look for a break of Thursday’s low near $285. A close below likely puts the 21-day moving average and $277.50 area on the table.

Boeing (NYSE:BA) had some negative news on Friday. While that hit the stock, it didn’t destroy it. Instead, shares are trying to bounce. Unfortunately, the charts just look sloppy.

Shares have been struggling to hold above the 10-day, 21-day and 50-day moving averages. If the stock can’t hold Friday’s low, we may need to see it test down into the $220 support area, as well as the 10-month moving average.

Below that, and the 200-day moving average will be forced into action.

On the upside, however, it’s really a battle against the short-term moving averages outlined above. If BA stock can rotate over these measures, it puts the $255 area in play. That’s been stiff resistance for a couple of months now.

On the date of publication, Bret Kenwell held a long position in PYPL. The opinions expressed in this article are those of the writer, subject to the InvestorPlace.com Publishing Guidelines.

Bret Kenwell is the manager and author of Future Blue Chips and is on Twitter @BretKenwell.